EndNote X4 creates an automatic group under the Permanent Groups list,  based on the bibliography of an open Word document.  This would be a handy feature if it didn’t scramble itself (see screen shot) If a reference is selected from the reference list, it sometimes actually selects a different reference, apparently at random. Most of the time this feature works fine, and I forget about its “auto-scramble bibliography feature” and only on review have I noticed that I had nonsense citations.  Not how to impress the reviewers! The scrambling happens after inserting the selected citations: when initially selected the reference shown in the preview pane will match that selected in the reference list, lulling one into thinking all is well.  Only after Cite While You Write instant formatting kicks in is it apparent that the wrong citation was inserted. I believe the problem is not with CWYW, because on unformatting, EN actually inserts the wrong citation number. Obviously a work-around is to avoid using the bibliography-based automatic group, but it would be nice if this feature worked as intended.  It’s a consistent enough bug I would think others have encountered it, although I didn’t find any obvious posts. Suggestions welcome? 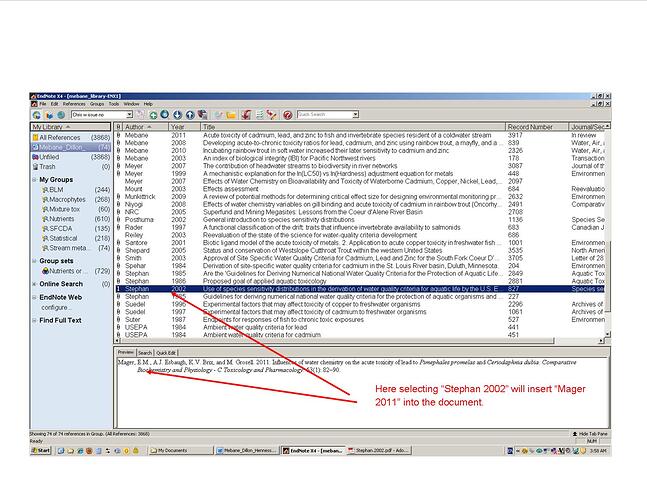 Have you installed the patch to upgrade EndNote X4 to X4.0.2 and does the problem still occur after the upgrade?

Thanks for the info. A search of the Knowledge Base hasn’t yielded any results although I wonder if it’s a problem with the software or your library.  Suggest you contact Tech Support: