Hi everyone! I am having an issue with EndNote X8, and I am a bit frustrated. EndNote X8 (on PC with Word 2013) does not abbreviate the author list with 3 or more authors on second use. I am using APA 6th citation guide, and I have an edited output style that is selected both on EndNote and Word. Joo, Lim, and Kim (2011) on second use is still Joo, Lim, and Kim (2011). I attached the image that shows the settings are correct. I did not have this issue when I was using X7. I hope you can help. Thanks! 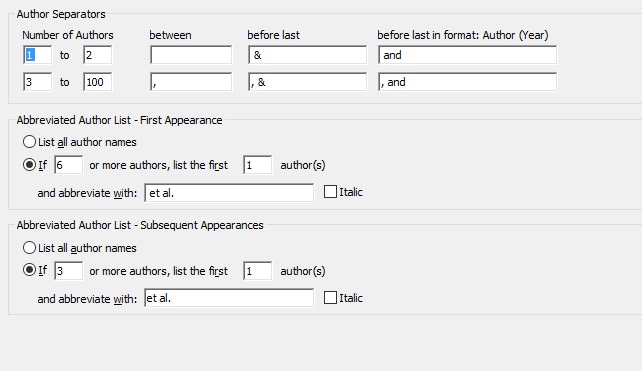 If I could ask, does this citation refer to the authors of monograph or to the editors of a collection?

These are two different references but on subsequent use both of them will be Joo et al. (2011). I suppose EndNote is not abbreviating them to avoid confusion. But what is the correct way of citing these sources on subsequent use? Should I not abbreviate them? I could not find anything in APA 6th manual.

I believe that this is because of the similarities between the two references. Endnote is attempting to make sure that there are no ambiguous citations, so it’s listing as many authors as possible to distinguish the two references from each other.

I’m not 100% au fait with the current requirements of the APA guidelines, but I do believe that this is the correct approach. There is an entry from 2011 on the APA’s blog about how to distinguish similar citations from each other, and this article states that the APA style requires you to list as many authors as are needed to distinguish two similar references from each other.

I can’t post a web address into the forum here, but if you do a Google search for “APA blog Reference Twins”, the article should be close to the top of your results.

I really appreciate your time explaining these details. I will do some more search and ask some more people to make sure that this is the correct way to do. But your explaination does sound logical. Thanks so much!

You’re welcome. As long as I could help you out!

how to do is there an explanation

difficult also if no one helped