There might be a comma in the “between” option box of your APA output style that should be removed.

You might try downloading a new version of this from the www.endnote.com support pages.  I think they fixed the problem awhile back.

I fix the problem with your help. The problem isn’t in the first box but the last. See image in attachment.

I also attach the APA 5th sytle with the fix for et al. when 3 or more authors.

I try for more than 2 hours, however, after i saved  the changes. The problem still there,

I delete the , before et al in the author list,

canot figure out what is wrong?

Can you clarify your problem?  Can you not save the edited style, or does the style appear to be changed, but not being applied?  Can you try to download a fresh version of the style or attach the style you have to the message and we can look at it.

Your post was very helpful for a few of my problems but I’ve still got one more problem. What if I want to get rid of comma after et al.? I have tried a lot of things in Citation Author of the output style but I can’t delete this comma.

In the Author lists for citation, there shouldn’t be a comma behind the et al. in either the first or subsequent boxes.  see attached.  – Mine doesn’t have one anyway.  If that doesn’t work --attach your current style and one of us can take a look see? 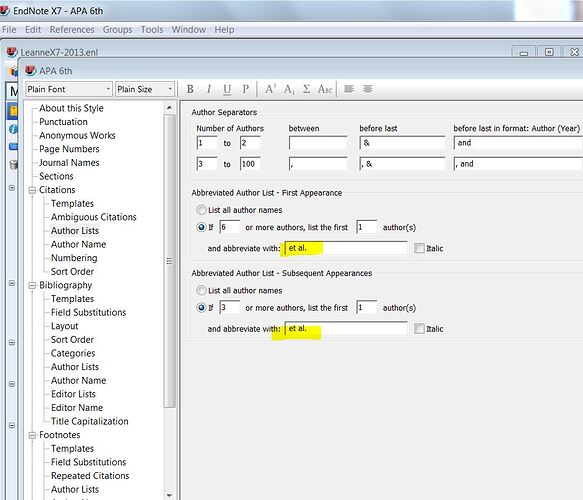 I have followed the instructions and deleted the comma but the changes are not being saved, once I go back to the document it changes again to Author & Author instead of Author et al.