Hi! I am a new user to endnote web. I love the product but I am having a couple of little problems getting the entries to display correctly.

Occasionally an et al entry will be displayed as author name, et al., instead of author name et al.,

I don’t understand why endnote is putting in a , after the author name on some entries and not others.

Also, sometimes endnote for web will put in the authors initials before the last name in the citation. For example it will read (J.E. Smith, 1990) instead of (Smith, 1990).

Again this just happens on a couple of entries and not all the time. When I fix it manually by deleting the extra stuff, it just comes back the next time I add a reference.

thanks for your help with this!

For the first problem, does it correlate with whether the reference is cited the 1st time  which is different from the second time referenced in the Endnote style (probably not correct?) . It is also different in that it only abbreviates to 1 author if there are 6 or more authors, the first time, and the second and subsequent citations only list 3 authors, before defaulting to the 1 etal format.  Easily fixed by deleting the comma or inserting it by editing the output style, saving as a new style and using that (which ever is actually correct)?

For the second, copy and paste the first author name from one record to the other.  The initials are usually caused by subtle differences between the names which Endnote interpretes as two different authors, and thus “disabiguates” them.

This certainly seems incorrect. The APA6th manual sets out the requirements very clearly (on page 177).

It’s easy to edit the style if you are using desktop EndNote, but on EndNote Web you can’t edit the output style, unless you are an administrator for your site.

The removal of the comma in the primary etal format is “as designed” to take care of an inconsistency when there were subsequent citations with repeated authors:

In APA requirements when two or more citations have more than 6 authors you are supposed to truncate that in text citation to the (Main Author et al. 1996) BUT when you have two citations that have more than six authors and the dates are the same, you have to show as many other authors to make the citation unique: (Jones, Singh, Lane, et al. 1996) (Jones, Singh, Kostial, et al. 1996) If we remove the comma from the If more than 6 …then abbreviate with , et al. The first citation will be correct but the second set will not.

We changed the logic in this area and removed the comma so that it would work correctly.

In this user’s case, we need to see how his authors are formatted in his library.  The author formatting in the references could be having an effect on the format of the in text citation.  Leanne is on the right track.

Please take a look at your references and see how the authors in the reference are formated.  If you have multiple authors you can have them separated by a semi-colon, if there is only one author make sure that the author name is not followed by a comma:

J.E. Smith,    when you insert a comma after the author name EndNote thinks it is a corporate author and that it should not be re-formatted with the style.

Please let us know if you need additional assistance,

The listings in question have less than six authors. It happens after the article has been referenced twice. I will purchase a copy of endnote x3 so I can change endnote styles.

That is how the authors appear in my Endnote reference. When I insert a second citation of this article I get (Baumeister, et al., 2003)

Please let me know what I am doing wrong.

Yes you are correct, the comma is not supposed to be there.  I’ve udpated the styles and will include them in the next update of EndNote Web.  In the mean time you can contact your site Admin for EndNote web and have him/her update the style to your sites webpage.

The updated style is located at:

Please let me know if you need additional assistance.

Help! I feel like I’ve been banging my head against a wall for the past hour or more. I am still having trouble getting the authors names to appear correctly. I don’t understand what I’m doing wrong.

The record with the author’s names reads:

I have changed the first name to initials hoping that would fix the problem. I have tried copying the authors name from one record to another. I have deleted the reference from the section. Still it keeps coming back with the authors first name and initial in the citation. My record doesn’t even have his first name spelled out anymore, yet it is still coming through! I don’t understand, please help!

The manuscript is pulling the information from the travelling library and not from your Endnote library.  The easiest way to fix it, is to unformat the references and reformat them.  It will now no longer find a match to the offending reference(s) and ask you which one to replace it with.  – If it is just that one causing the problem, you can delete it and reinsert it.  Unformating all of them just makes sure there aren’t any others that have similar disconnects with the library.

So it updated to the endnote file, but it is still putting in the first name in the citation.

Thanks for your help!

Are there other Robins first author papers referenced in the manuscript?  They have to be listed exactly the same, or the default setting for the style demand they be “disambiguated”.  Sometimes they look exactly the same, but if you replace the author with a paste from the other record, you will get rid of the initials.  If there are two different Robins, then the disambiguation (is that a real noun or even a a verb?)  is necessary, according to most publishers.

I have installed endnote x3 on my computer. I tried updating the style as suggested. My et al., entries are still showing a comma after the authors name. What else do I need to do? OK I think I have this fixed now. I had to use a copy of the APA 5th ed style.

How can I fix it?

Have you tried downloading a new version from the endnote.com website?  It sounds like they may have fixed them from the Administrator note earlier in this thread.

I have the same problem - I’m using latest EndNote X4 (Build 4845) on a Windows machine with Word 2010. I REALLY wish there was a solution to this problem.

The latest update to the APA 6th output style includes provision for the APA requirement that:

“… when a work has eight or more authors, cite the last names & initials of the first six authors then follow with a comma and three spaced ellipsis points (. . .), then the last author’s name.”

In the process of introducing this change, they appear to have repeated an earlier error with regard to having a comma appear after the authors name when ‘et al.’ is used. This was fixed in a previous version of the APA 6th output style.

It is relatively easy to edit the APA output style so that the comma does not appear after the author surname [see attached image]. Alternatively … try using the already modified APA 6th output style. 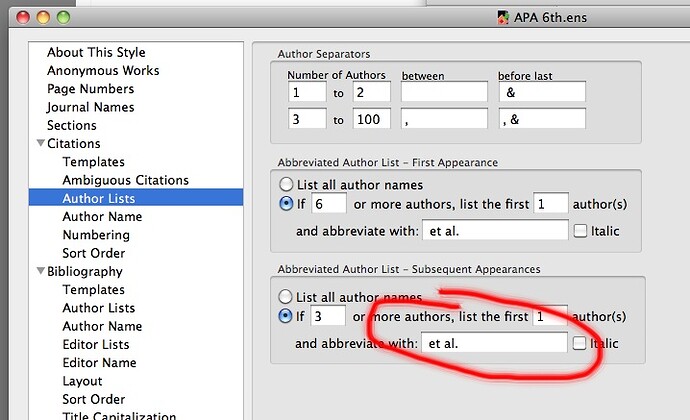 Thank you very much - your fix worked.

i have the same problem . any body teach us please ?!!

To elaborate on Greg Fry’s prior posting you will need to edit the APA output style’s “Author Lists” setting by doing the following:

We got around this problem by doing the following. When editing the APA 6th output style to remove the comma do not save the change as a copy. You need to save it as APA 6th so that it overwrites the original. We found that for this particular problem when inserting the citation using a copy version of APA 6th it always reverted to the incorrect settings in the original APA 6th, ignoring the changes in the APA 6th copy.