Does Endnote support the new Mac OS? If not, when will it be supported?

We definitely need an answer from EndNote.

I remember a previous update to Endnote / Word plugins etc took 12 months… I ended up moving to Mendely for that time. 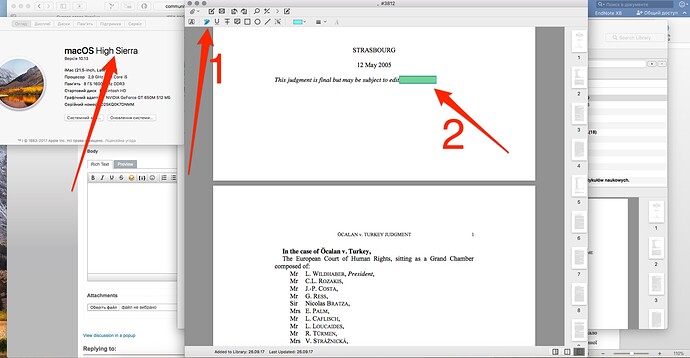 Thank you challenger. I emailed support team yesterday, they even don’t know the final version of 10.13 has been released to public, saying they will update the EndNote ONCE 10.13 released.

This is par for the course and happened with Sierra. The beta has been out for 6 months and are made available to developers precisely for updating to new OSs.  What is wrong with you Clarivate that you don’t even know a new OS is being released.  I am trying to preview the Papers/ReadCube fusion.  If that looks good I won’t be looking back or upgrading again to Endnote.

AFTER writing this I was informed by an administrator that betas of OS releases are tested but results not published. I understand that publishing before the GM is a bad idea.  Giving us the knowledge that you are testing just prior to GM release and any guidance is keeping your customers informed—a good idea. I take back what I said and thanks!

Smart move, olwin. I am also considering switch from this high-cost but slow-reactive software to a new one. I’ve spent hundreds of dollars on it and what is happening is rediculous. I cannot let this single software stop me from enjoying a new macOS which has many technogical advances.

After reading the knowledge base article I installed 10.13. Endnote is running ok for me, I have not yet tried inserting references but will soon and will update. So far no issues.

Hi olwin, I am looking forward to your testing. Thank you in advance!

I see that a technical support agent has followed up with you today to indicate the same information that has been posted in our knowledge base article. For your edification as well as others, we always test our software against the beta releases of the macOS up to and including the Golden Master and Final Release. We do not publish our preliminary findings as they can frequently differ from the Final Release. In the past, we experienced a situation where our software was compatible with the beta releases of the macOS, only to find we lost compatibility with the Golden Master. As such, we have to be very careful with the compatibility information we indicate until after the final release of the macOS. I apologize for any delay in publishing that information.

Let us know if you have any questions. If you run into any technical issues, be sure to contact our Technical Support team:

Great to hear!  I do not expect you to publish but…it is great to know that you are testing and you will tell us.

My Endnote desktop is not syncing in High Sierra 10.13, I will submit a report. There are no errors generated in the Sync diaglog but the web version has new references and attachments that are not syncing to the desktop app (X8.1 Bld 12930).

Same issue. EndNote runs OK, but the sync does NOT work – just connects and quits – no updating. Was going to try downloading again from the server (my huge endnote file) BUT will have to remember how to do that!! [Agree with your comments – no errors in Sync dialog, but did NOT sync, either!]. Very keen to know if anyone has a solution.

i also do have problems when it comes to highlighting text inside of pdfs. The highlighting covers the whole text and i cannot see through it anymore. It is just a yellow brick on my screen. So it seems like the transparency is bugged.

I need to rightclick on a reference, then open pdf with “Preview” from Mac. Then highlight my text passages there, save the pdf, then endnote takes the changes.

This is very annoying. Please fix it. Thank you very much!

config tool wil not identify MS Word startup location. Downloading the CWYW bundle installer tool does not solve the situation either. It will not recognize the startup folder which is in exactly the location mentioned in this article (below).

Upon startup, word states that CWYW add in is incompatible.