How to display Group and Group Set in custom field?

I am trying to find a way on how the display Group and Group Set field as custom field (obviously to have the group & set values displayed).

This is not a current option, as the information doesn’t live in a “field”.

What I do, is use a custom field to edit the collection in a group, to replace or add to the field with the name of the group or group-set, and then display that custom field in your library view.  Obviously this is manual – but I actually do it the other way around.  When I down load records from the databases, I first use the editing function as above, and then use that field to create custom smart groups.

“… use custom field to edit the collection in a group” can you please detail a bit that statement?

“… use custom field to edit the collection in a group” can you please detail a bit that statement?

Endnote provides eight custom fields which users can modify and add to any or all reference types (e.g. Journal Article, Book, etc.).

In your case you would add one custom field (which could be named for example “Group” or “Group Name”. Once the field is added to the reference type(s) you would then: 1) (in Endnote) select the references within one Endnote group then 2) use Endnote’s “Change/Move/Copy Fields” function to insert the corresponding group name into the custom field (“Group” or whatever you’ve named it). Repeat steps 1 and 2 for each Endnote group listed under the “My Groups” section. Finally, change the Endnote “Preferences” display field setting to display the custom field in your library window.

Refer to the training video “Custom Fields and Reference Types” for an overview.

Are you sure that you understood my question?

Yes, he did reply with the instructions to add a searchable item to a custom field renamed “Group” or “Group Name” where the contents included one or more group names.  Even with out doing that, you can add the custom field to your library display at the top. In either case though, it will be the original generic “custom group x” rather than the ref type name you give it, as only the generic field names are available for this use in the library display.  The advantage of defining this group in the ref types, is that they will be displayed as a field in the record, and you can enter things into them in the edit records views and you know what the field content should/could be.  If there are undefined in a ref type, they won’t appear in edit view, unless they already have content.

Finally, you may want to create a smart group that is constructed from a search of this field.  So if you had a custom 8 containing the group’s name, and you created a smart group searching on that field, you would be full circle.  Then you can see clearly if your own group has the same number of records as the smart group.  If not, you can select those in your group, that are not in the smart group (combining group search) and edit those to add the group name to custom 8 field and keep them up to date.

Similarly, if you manually add the group name to the custom 8 (group) field (for example when you are importing a new record), you can see them appear in the smart group, and move them (I just move them all – which doesn’t duplicate them or anything, just adds the new ones!) to your manual group).

I know it sounds complicated, but just to finish off, you can see three groups listed – highlighted “custom 8-Hox Smart Group”, below that “Hox or Homeotic (not Smart)” and “Hox or homeotic (several fields)” - also a smart group.  All three have the same number of records right now.  But if I imported a few new records that contained the word Hox or Homeotic in any one of several fields (title, abstract, keywords) then the last smart group would acquire those new records and 940 would go up (lets say to 944).  When I see that, and I can copy the contents of that smart group into the “not Smart” equivalent group.  I can also edit the several fields group, not present in the custom8 group to contain “hox” in the custom 8 field, which would increase the number in that group to 944 too.  All in sync, and when I sort on the custom 8 field in the library view, they would be grouped.

As another example. See attached with some of my groups.  I am showing a smart group search made from combining two groups (present in Krumlauf’s smart group (which happens to be a search for Krumlauf in the authors, but could be a search for Krumlauf in “custom 8”) and a hard wired group I drag and drop into called “Krumlauf”. The search was records present in smart group Krumlauf, but not in hard wired, Krumlauf, and it shows the two records.   The smart group has two more records than the hard wired group, Krumlauf.  – I could now add “Krumlauf” to the custom 8 field, using the tools change/move/copy options.  I could also grab those two records and drag them into the hard wired Krumlauf group, bringing the number up to 84, and indicating the two groups are in sync.

Note: Hard wired groups are necessary for maintaining groups in the online synced library.  That is why I maintain smart groups and hard wired manually constructed groups in my library. 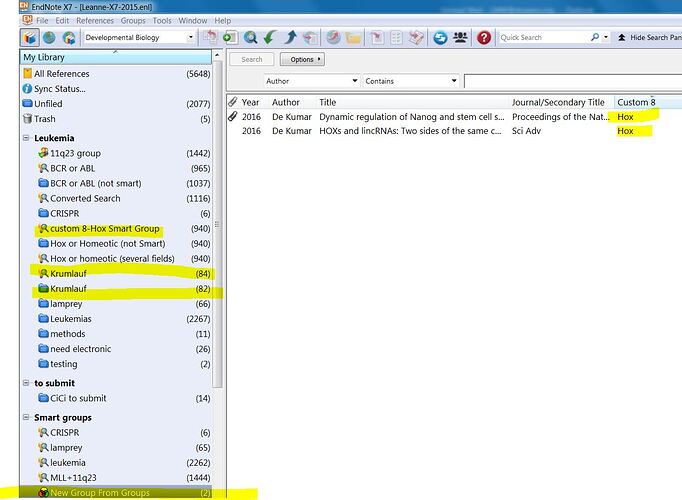 Sorry but neither of you has got my question. It may be my fault though.

My original question addressed the topic of being able to show the name of the group  in the custom field. Based on your attatched picture here is what I ment (I modified it). That is I want the name of the group in which each individual entry belongs to be dispayed in that particular custom field (this is basically being said twice in a slightly different way, hopefully to be able to pass my idea). 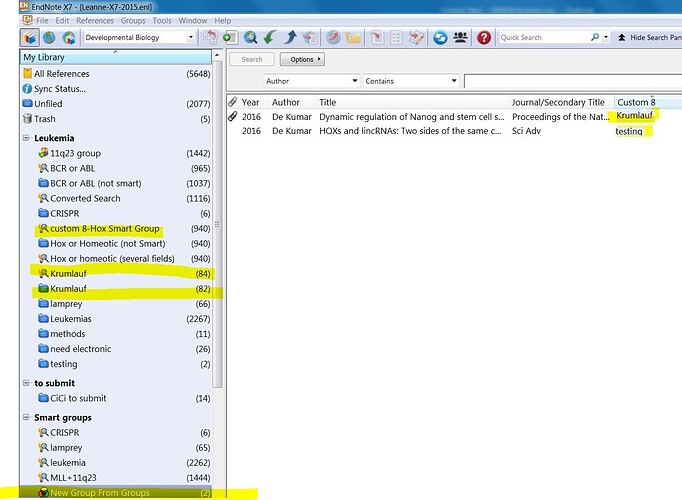