I was used to my PC version of EndNote, and loved it because I could create folders within folders to organize references by major topics and subsections wihtin that. My new Mac version has Group Sets, and seems to only allow groups to be named one level below that (see the attached screen shot).

My question is, for example, within the Group Set “Basic Science” (see the screen shot), if I want to make a subfolder in the group “Glucosamine,” how do I do that? I’m trying to create a hierarchical structure, and I would appreciate any help. 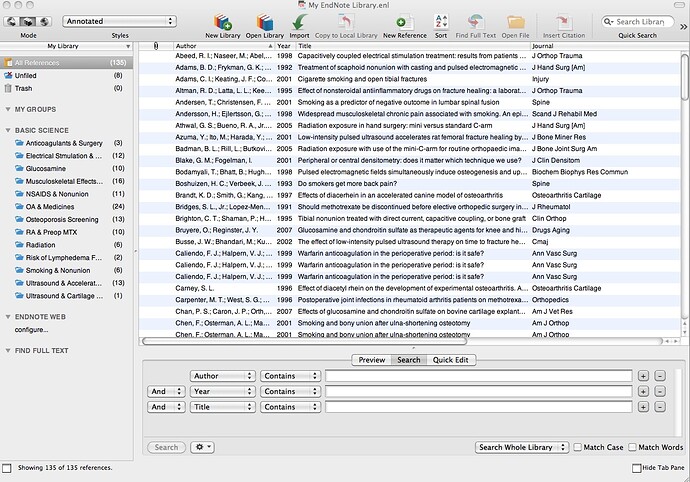 As far as I know, EndNote allows only two-levels when it come to groups: Groups and Group Sets. It is not possible to make a subgroup within a group (and this has never been possible). It is possible, though, to make a group with contents from different groups (Create from groups).

A workaround to EndNote’s limitations in creating subgroups would be to rename each group by first adding a number corresponding to their alphabetical sequence order (see attached image). The numbering does two things: 1) retains the sequence display order of the groups; and 2) allows for creating a pseudo “subgroup” (technically it’s still a group but has been “dressed-up” to somewhat mimic a subgroup).

You could rename/renumber all of the groups but if you wish to later add more groups the additional groups will upset the numbering sequence, necessitating renumbering.  (An alternative shown in the attached image is to rename/number the groups up to the group that will have subgroups.)

After renumbering the groups, create a “subgroup” by using the “Create Group” command and naming the subgroup to include a sublevel number (e.g., 3.1, 3.2) with the subgroup’s name. If preferred, a few blank spaces between the sublevel number and group name (e.g., 3.1    Side Effects) facilitates the illusion of being a subgroup.

Thanks Jan. My old PC version was from the late 1990’s, and I could organize the references very much like I store papers at home… in a hierarchical way.

Maybe EndNote will feel my pain and include such facility in subsequent iterations.

Best to from San Francisco!

Thanks CrazyGecko. I like the idea. Visually workable, and efficient. If the Groups within Groups are edited in the future, then I would have to make a 3.11 between 3.1 & 3.2 to make it work, but it can be done. I just wish EndNote would allow organizing the refences like they used to in my PC version from the late 1990’s.

Along these lines, is there a simple way to sync my groups/folders between EndNote and EndNote Web, or do I need to recreate the same organizational scheme in both places?

“As far as I know, EndNote allows only two-levels when it come to groups: Groups and Group Sets. It is not possible to make a subgroup within a group (and this has never been possible).” [parabuthus, 9-30-2011]

What is the design rationale for this limitation?

4 years later, is this still the only way to create nested groups in more than two levels? 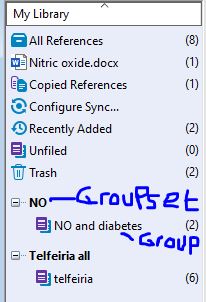 Unpleasant to know that even after 10 years, we still have the same trouble trying to have hierarchy in EndNote.