Combining 2 styles in one bibliography

While I counln’t find any treat about the topic I post my question about it here.

I work with Endnote 7 and like to create an output bibliography that include two different citationstyles.

On the one hand, all my english literature shall be outputted in an Chicago manual Style as follows

On the other hand, the same bibliography I like to include all french literature in basically the same chicago style but with different capitalization of the title (only the first noun as a majuscule), so that it finally looks as following:

So my general question: How do I get the wished result?

More specific: How can I combine the Chicago Manual Style with another style, e.g. a french style, and where can I download such french style formats.

Thanks in any case for your help. It is very much appreciated.

You just need to enter them exactly how you want them to appear in your endnote library and make sure the output style leaves those titles as they are in the bibliography (see attachment for this setting) which is easier than trying to differentially designate each citation as you enter it according to language, so Endnote would know which to treat which way.  Once you have done it, and since it sounds like this is what you always want, it is worth the effort at the time of entering them into your database, or correcting them when you utilize them in a publication,

Alternatives are complicated and involve using two different temporary dielimiters for inserted citations, formating once with one style, again with tthe other delimiters and the other style, and then removing links and making sure the bibliography is correctly sorted (and it won’t work in any case with a numbered output style).

in edit – had forgotten to add the snip image 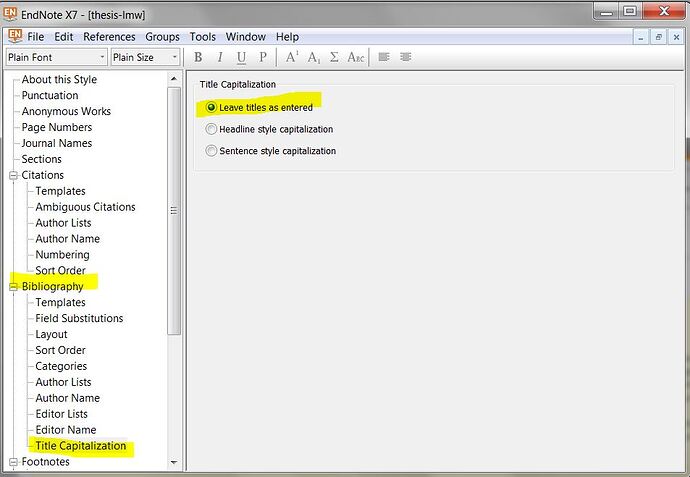