Editing fields in the footnote templates

I am just about to submit my thesis and I am having a problem with some of the formatting of the footnotes in Endnote. I am using Chicago 16th Footnote output style. The official style guide says that repeat references should use a shortened title.

The official Chicago guide says that for repeated footnotes the title should be shortened:

“The most common short form consists of the last name of the author and the main title of the work cited, usually shortened if more than four words”

The problem I am having is that the repeated footnote is not short enough. It looks like this:

My supervisor would much rather that it simply read: Kouvaras, Loading the Silence, 147.

I have tried editing the output style but this ‘short title’ field is a preexisting field that I don’t know how to edit or do not know the criteria upon which endnote decides that this is a short title (clearly this title isn’t shortened).

Does anyone know how I can either edit the field itself so that everything after the colon does not appear in the shortened footnote? (or to stipulate how many words a “short title” might be)

Short titles are usually imported from a database as such into the “Short Title” field of the record in your library.  Endnote simply uses the content of that field in your output as defined in the footnote templates, or the full title if the field is empty.

If they aren’t short enough, or if the field remains empty in the record, I think that you will need to edit each record’s short title, to shorten it, or copy what you want to appear as the short title into each library record that you cite in the footnotes.

remember that if the field is empty, you will need to be displaying all fields, or it will be hidden, when you are in the edit record mode.  In the image attached, I show a book with a short title and the full title.  I also show where you would “show empty fields” but have that off in this view, so I can capture both fields in the image (otherwise the short title would pushed pretty far down the page by the empty fields). 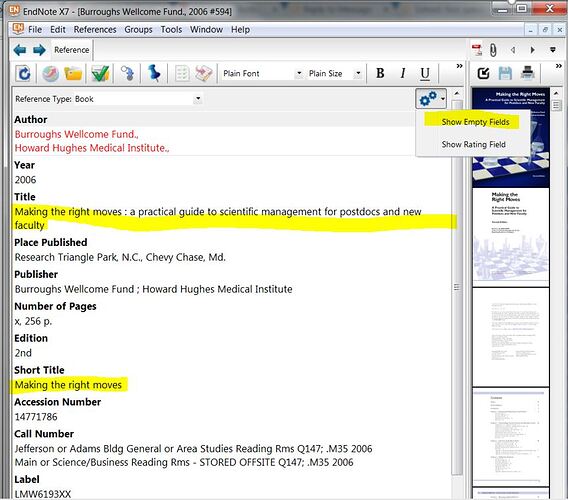 That makes complete sense and thank you so very much