After updating word for mac to 16.44 (the version that supports apple silicon Mac), error appeared when opening Word:

Word wasn’t able to load an add-in. Your add-in isn’t compatible with this version of Word. Please contact the add-in provider for an update.

but I can fix this by opening word using Rosetta (Word- get info - opening with Rosetta). doing this :

I think the add-in should be updated to fit the 16.44 version of Word. 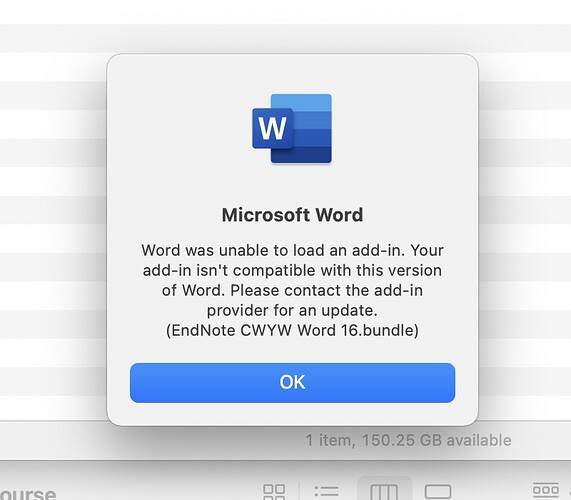 I experienced the same issue and reported it to Clarivate. It is a known compadibility issue on M1 Apple Silicon Macs with the new Universal Microsoft Word.

Basically the issue is that the Word add-in “Cite while you write” does not launch in the Universal Apple Silicon Microsoft Word version. Clarivate needs to update the plug-in for native compadibility.

The work-around is exactly as you stated by checking the box “Open Using Rosetta.” This forces Microsoft Word to launch as an Intel program and restores compadibility with the Endnote Plugin

This issue extends to Endnote 20 as well. Until Clarivate updates the plug-in, this is the best temporary fix.