how to modify record number in endnote

Thank you in advance

You can’t – they are an autogenerated number.  If you sort your library as you want it to apear and copy it to a new library, it might work.

So bad, I was used to modify this field in RefMan and expected to be able to do the same in Endote

Why does it matter to you?

It matters to me because I do most of my drafts in Scrivener, so I use the codes, e.g. {Kay, 1977, #878}. I work on three separate machines, so record numbers have to be the same. EndNote Web doesn’t keep record numbers, so everytime an Endnote connects to EndNote web, it downloads data into consecutive record numbers  - even if I have deleted files on one computer so the record numbers are no longer consecutive. Then this scheme falls apart. (I used to do the sync with SpiderOak, which worked great unless I forgot to close Endnote on one machine, then it totally trashed the database and I had to pull everything from a backup.)

You can change what endnote uses to create the temporary citations in the preferences of the desktop version of endnote.  Not sure about the online options.

So in preferences you can change to use the pages (which I find works), Accesssion number (which not all of my citations have, and endnote will default to record numbers if there is no accession number) or the label field (not good, because a find on the label field doesn’t force the number to match 100%  (I found that label 12 matched 12, 120, 121, … 129, 1200… etc)

So I would recommend the pages field?  Not sure you can get this to work with Scrivener.  the Author/pages is unlikely to ever match more than one record.

I used to I further edit the field using the same tool to add with LMW (or possibly another 3 letter code, that would indicate it came from a different library)  preceding the number and then repeat and add a XX or other unique characters that endnote doesn’t use (so not # or @) at the end – (unticking the  include spaces in each case).

Every now and again I search the Label field for XX and then select all, show all (CtrlM) then hide selected (from the references menu).  Then I do the above again to just new records.

Not sure that will work – if going from one desktop to the other with the syncing though. eventually I suspect the numbers will be out of sync on the two machines and no longer be unique.  – so I might give that up.  But I don’t currently really rely on the syncing.  I work 95 % from the same machine and the same library.  Knowing the authentic record number is therefore less and less important to me. 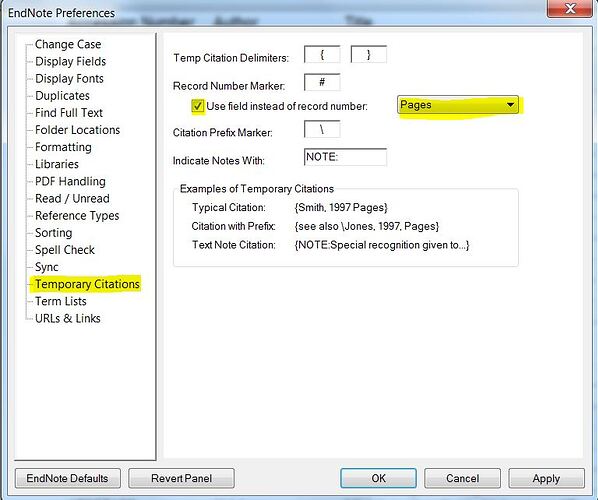 That approach seems like a reasonable method, but leaves me concerned.  Since Endnote is essentially a database, and the reference number is the one absolutely unique field within the record, why wouldn’t this key field sync between Endnote and Endnote Web?

I’m working between two different desktops (the cost of being a doctoral student and a full time worker) and I’ve tried everything to ensure that sync is constant so that record numbers stay the same in both places (app always running on both machines with 15 min syncs). Even with such a robust setup, it only takes a couple of days for things to be out of whack–things that are sync’d up to the web from one computer appear to be pulled back down in a different order, and thus a batch of adds on one machine are mixed up on the other.

The record number, it seems to me based on my training in database management, is THE ONE field that is most important, and yet it is the one that isn’t sync’d.  This completely baffles me.

I guess I’ll experiment with your solution as it seems like it might work, but it also looks like extra work since I then have to ensure that every record has whichever of these fields I chose to use.

The record number in EndNote desktop has always been an internal identifier assigned by EndNote and not changable by the user. Neither EndNote online nor EndNote iPad utilize record numbers as identifiers. For syncing purposes, records are assigned a different internal ID to identifiy when records are added, deleted or changed.

I agree with Eric and other users – why NOT use the unique identifier historically used by Endnote?  The temp record still defaults to use that identifier, when you unformat citations to their temporary format, which many of us do routinely when we share with non-endnote users and this is essential if a collegue is is going to use a different processor (like open-office or papers) which essentially corrupts word fields including endnote.  So you are making it impossible for us users to maintain the synced library and reformatting documents on various computers.  The fields are huge, albeit hidden, making large documents even larger, so I tend to keep them in the temporary form.  I have not used the sync or share facilty as a consequence.  I stick with my tried and true work flow and use our network drive to share the library between computers.

Is there any field within each of the records that is a unique identifier?  If not, how does EN Web know which record I’ve changed if, for instance, I have duplicates or near duplicates in my library?

Is it possible in a future release to simply make the record number field part of the database that is sync’ed across all platforms?  Any and every database management system I’ve ever used has been built upon the use of a key field to keep records, even potential duplicate ones, separate and distinct.  I cannot understand why EndNote chooses not to do this.  I can’t lug my 27" iMac to the library or the office just to maintain a coherent library, and it seems to me that failing to include this feature, defeats one of the key reasons for having a web-based (i.e. portable) version of the library.

I’m not trying to be difficult.  I regularly promote this software over free alternatives to my own graduate students because it is powerful and mostly well-designed. However, this seems like a very simple fix, and one that has been identified by many for some time now.  And the inability to sync what appears to be the key field for each record is killing me in my grad work–both because of my moving from office to home computer and because I use Scrivener to manage these projects.

I fully fully fully agree. nowadays with features allowing syncing as well as cloud computing, I have many devices. However, since it happens to me once, I am so afraid of unformatting my text and using another computer, so that I don’t do it anymore. Even traveling libraries doesn’t help. My libraries are sync between 2 computers using Endnote online, But i never use the second computer to add new references because I Know that the record number won’t be the same. If for a reason or another I have to reformat the doc, I am quite sure to have conflicts and worse, to have Endote updating the new reference wit the record of my main library resulting in a total new reference and irrelevant reference.

In order to circumvent this problem I have change in the pref the temporary citations from record number to accession number in both libraries. The problem is to fill up this field manually with a unique identifier. But then if you unformat the record will no longer appear but the accession number. It will help avoiding mixing up with references.

Hope this help but it is not convenient. Developers must change this behavior of Endnote!

For me I want to remove the record number from the in-text citation, how do I do it?

I assume you mean that the citation is not being converted from the temporary to the formatted citation?  You need to either mannually update it from endnote ribbon (update citations and bibliography) or turn on the instant formating (same ribbon) and be sure the correct output style is chosen there.

I agree with adding the unique reference number to the webline lib so it syncs as well.  When I try to create a web library and then create a new library for my office computer–the references get resorted in the new desktop library.  You cannot even sort the web library by endnote ref number.  I have had this library for over 15 years and it has hardcopies of the articles catelogued by the endnote number.  It seems that if you have any deleted records in your library, the sync fills those blank numbers with other records thus changing all of your endnote reference umbers that should be “engraved in stone”.    I have tried to add these references directly to the web lib (with the described directions as a txt file) but it times out because the file is too big I guess.