Is there any limit in the number of file attached?

I intend to use EN X3 as my pdf file managers, but I wonder about it ability to manage my big library (about 720 pdf file with ref). Is there any limit in the number of file attached and the ref’s number?

Interesting question. I don’t recall any info in the manual that addressed the number of pdfs you could have in a library but pg. 91 of  the X3 manual states: “there is no limit to the number of references you can create in an EndNote library…[but] it is recommended that the number not exceed 100,000 to maintain efficient performance managing the database”.

It may be a leap but if it’s possible to create a library of 100,000 references, it would seem reasonable to expect being able to attach a pdf for each reference — assuming you had enough memory on the computer’s internal hard drive or an external hard drive.

No - EndNote libraries are designed to be “unlimited.” There should be no limit on records, file attachments

[You can attach up to 45 file attachments per record in an library - but no limit to the total number of files attached to a whole library.], etc - beyond file size limits that the operating system will impose. “Unlimited” is admittedly a pretty hard number to test and verify but we do regularly test internally with EndNote libraries with about a quarter of a million records - many with file attachments. For files of this size, performance is going to depend on the operating system, RAM, and processor much more than EndNote itself.

Based on our on-going tests, and input from many customers, if you have an EndNote library with several thousand records - many with file attachments - on a relatively new and fast computer, you should have no issues.

If you are experiencing something different, please let me know and I will have the team look into it.

Hi, understand the circumstance. I checked it up and let me make it clear again for the newbies.

You can have thousand of references, as many as you want.

Each reference can be attached with many version of pdf (or word, excel…) files (not exceed 45). This is the real meaning of number 45 that I’ve found in Endnote manual book. (see photo). 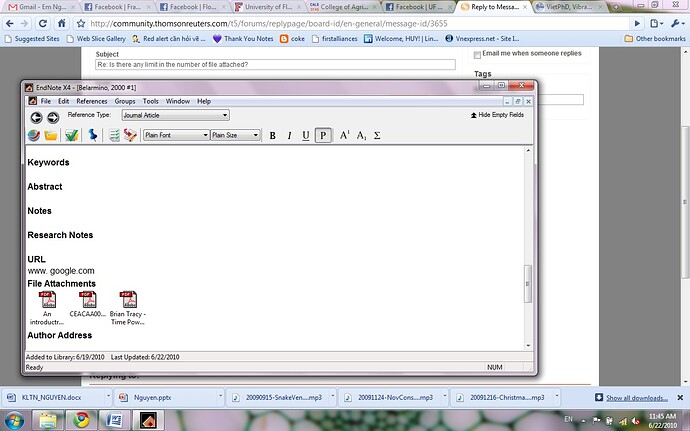 Related to number of references I discovered with X3 that the limit is 330,000 records. A message even appears indicating that the limit has been reached. I soon will test X4 to see if barrier is lifted.

The upper limit to the number of references you can have in any one EndNote library will depend on the version of EndNote you have. Please see this article: