Hoping that unlimited records could be available with EndNote X4, I hit the wall again at 330,000 records exactly. My file size not even that big -  the enl file is about 6MB and the data folder is about 72MB. Error message “Reference limit has been reached…” indicates limit coded into program. Screenshot of error attached.

This is a bug that we are working on fixing. The Macintosh version of EndNote X4 which is currently in beta development does not exhibit this behavior so it looks like we have a solution.

What is the status of this issue? I have the same problem. I am coming from Papyrus and need to go to 750K. Happy to beta-test patch if possible.

A fix for this is planned for a free upgrade patch for EndNote X4 for Windows. We plan to have this available sometime this Fall.

Please email me directly if you would like to help to beta test.

That is good to know. Looking forward to the patch and meanwhile have sent you a direct email for beta test help.

Just tested update X4.0.1 and the limit has been increased to 999,995! Thanks.:smileyvery-happy: This limit was on both the PC and Mac versions. On my PC using the quick search for one word took only 45 seconds. Sorting by title only 106 seconds. The manual still states under fields “There is no limit to the number of references you can create in an EndNote library.” 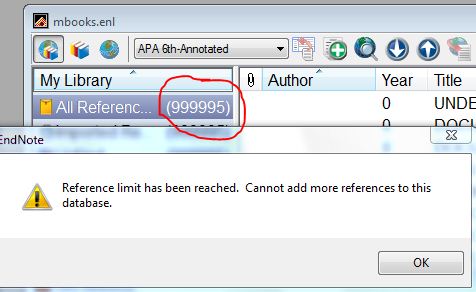