Hi, I have had a couple of instances of students saying their pdf’s are disappearing from their EndNote library. In each case the pdf folder has disappeared from the data folder? In one case the student is just working on one computer with EndNote X3 and Word 2007. Has anyone else seen this problem or have suggestions to rectify?

If they moved their enl file and then tried to open it in a new location, or only take and return an enl file from another computer, and then copy it on top of the original enl, but not the associated DATA folder, sometimes it comes up as “corrupted” but sometimes it recreates empty folders in a new DATA folder or has the older incomplete DATA folders from the earlier library.  I am not sure if this is their problem?  Make sure if they are moving the library they understand the complex structure of the library and associated folders, and use the “compress” feature to back up and move the library from one location to another.

Corruption, or moving the DB, actually doesn’t seem to be the cause. I have seen the PDF folder repeatedly being deleted (and immediately recreated, empty) while I am working on an Endnote file. It happens erratically and I haven’t been able to find a single cause. But as far as I can tell, the deletion usually happens when I attempt to attach a PDF to a reference that already has an attachment by the same name: Endnote asks if I want to replace the old reference or rename the new one. If I opt to replace the old reference, the entire PDF folder is erased. Unless I have a Finder window open showing the PDF folder, I don’t realize that it’s been erased until I attempt to open some attachment and get an error message. It’s immensely frustrating.

I can’t replicate this with a new test library. It might happen only with certain libraries, or libraries of a certain size, or attachments of a certain filename length, or some other strange criterion. Could anyone else give this a test? Obviously back up your library first. 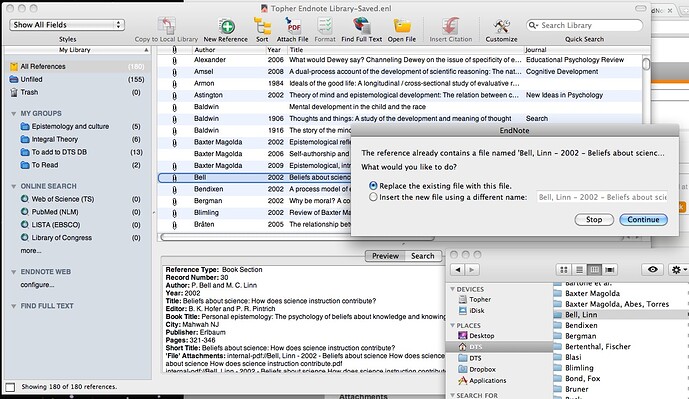 ENX4.0.2, Windows XP.  I opted to replace with new file of the same name, and had no problems.  All the PDFs remained and the one I replaced was accessible.  But perhaps it has something to do with other versions.

Thanks for replicating Leanne. This was with X3 build 5276 on Mac OSX. What do you think is the chance that this is a bona fide version glitch, that would continue to appear even if I found the install package and reinstalled Endnote?