I have a problem with some citations not formatting correctly.  I use endnote x7.  I have a word (office 2013) document with 90 or so references.  The citations are formatted in the body of the document (APA) so that if there are one or two authors then both their names are displayed followed by the year, and if there are three or more authors then only the first author’s name followed by et al and the year appear.

Two references consistently will not follow this rule.  Both have four authors (the first author is the same for both, and they appear consecutively in my library).  When cited in the body of my document both appear with the first TWO authors, followed by et al and the year.  I have tried deleting the references from the document and my library, and then manually re-entering them into the library before citing them again in the document. I can’t see any problems wih how they are entered in the library.  I have also tried citing them in a new document.  Oddly, when I cite one reference in the document then the citation appears correctly.  When I enter the second citation then BOTH change to show the first two authors.

So how do you want them to appear.  What is happening, is that endnote is adding the 2nd author to disambiguate the two references as defined in APA style manual.

See the attached setting which you can change, by unticking that box if you prefer to not follow this style directive (it looks like they would then be or still be disambiguated by the year and letter), save as to a new renamed APA-adjusted style, and then change the style used to the revised style on the endnote toolbar in Word for that manuscript. 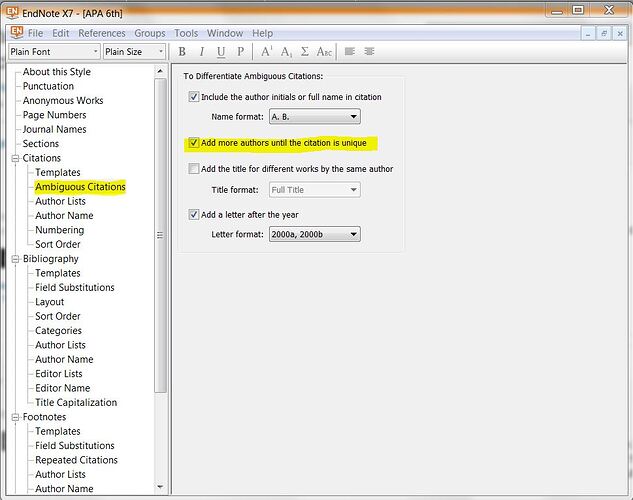 Thanks Leanne, that makes perfect sense.