I recently reinstalled OS X on my Mac due to faulty behaviour (2012 Macbook Pro, needed a clean OS-install). Before I reinstalled OS, I saved a copy of my EndNote library (X7) and put both the library copy and “My EndNote Library.Data” folder on a flash drive. I imported my library after reinstalling Word (also 2011) and EndNote (also X7).

My Word documents still has their citations in them and EndNote seems to be working fine. Some of the citations in the library, however, has disappeared. They still appear in the bibliography in the Word document, but the corresponding citation is nowhere to be found in the library, although it was there when I saved a copy of the library before the clean OS reinstall. This is the cause for several citations. The only thing that is changed is that I imported a new APA 6th output style, where I previously used a APA 6th style I had modified slightly myself (no major changes from the standard one). Also, I have updated EndNote to a more recent version of X7 than the one I used before.

How can I retrieve my citations that are now somehow in something called “Traveling Library”?

All help is much appreciated, 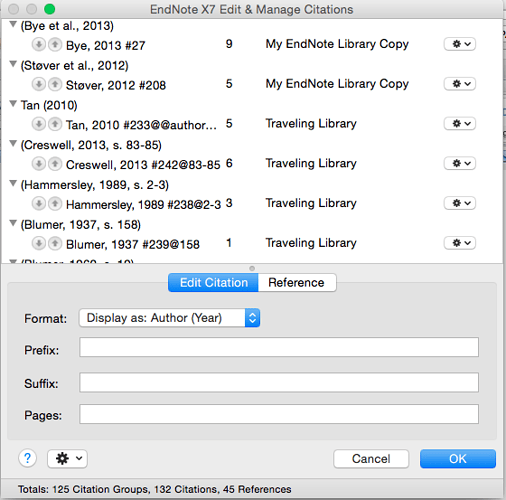 are they all “changed” citations?

have you checked if those are in your library with those record numbers?

The travelling library is the feature that lets you share a manuscript with another endnote user, who can add citations from their library, and you don’t need their library to continue to format the paper.  Everything you need to format in the various output styles is embedded/hidden in the field information,  Sometimes if the information no longer exactly matches your library entry, it doesn’t match and shows up as coming from the “traveling library”.  – but I don’t know why the citation would disappear.

I would make a copy of the manuscript, unformat (convert citations to temporary) and try reformating to see if it fixes the problem.  If they are in the libarary it should find them.  If they are there but have a different record number - endnote is likely to prompt you with a probable match, but if aren’t in the library, they may have come from a different library – then you may have to download them again, or find and open the 2nd library, or export the references (“export to endnote” from the word ribbon (into a temporary library) and import that library into your library with discard duplicates on.