Citations not showing in full

For certain references (not all, and I can’t figure out why it does this to particular ones), the full citation doesn’t display even when it’s the first time that reference has been used. It just shows the shortened version, as though it’s been previously cited.

Is there a way to force it to display the full citation??

Relatedly, is there a way to make Endnote display the full citation again at a later point? For example, I want the first time it’s cited in a new chapter to be in full. But the chapter is part of the same document, so endnote automatically displays the shortened version.

PS 4 days til I submit my dissertation so speedy advice would be much appreciated!

Attach the output style you are using.  Can’t give advice without it.  Is this a footnote style then?

Give examples of the first citing of a short citation that should be full and what you expect it to look like.  What reference type are they?  books, chapters, journal articles?

Not sure you can force a “full” citation in subsequent chapters, but it really depends on the output style.  I assume there is one long bibliography at the end?  If not, and you are just referencing the citation as footnotes or endnotes, then it is probably possible.

The style I’m using is ‘J Political Economy’ - one of the standard ones that comes in Endnote. I’m sorry but I don’t know what you mean by ‘attach’ the style? Yes, it is in footnotes.

The problem seems to be with book chapters - I think it happens when I later want to cite a different essay from a book I’ve cited previously. But I’m not sure why that would happen since I created each as a separate reference in Endnote.

Dworkin, “Hart’s Postscript and the Point of Political Philosophy,” 165.

Should show up as: Ronald Dworkin, “Hart’s Postscript and the Point of Political Philosophy,” in Justice in Robes (Cambridge, MA: Belknap Press, 2006).

But even the first time it shows up shortened. Possibly because, as I mentioned, I’d already cited: Ronald Dworkin, Justice in Robes (Cambridge: Belknap Press, 2006) 2-5.

I know this is short notice, I apologize. I didn’t notice the issue until now. Not the end of the world if it can’t be done. In fact I have worked out a sort of workaround: I have been able to make it appear in full by adding a space after the book title so that it seems to recognize it as a different book altogether, which is a weird fix but seems to do the trick. At least it’s probably the best I can do in time to submit the thing. But would be good to know longer term how to deal with it properly.

And I’d definitely still like to know if I can ‘force’ a full citation in subsequent chapters. There is a bibliography that endnote keeps auto-generating, but I don’t actually need it.

I am not sure I understand all the nuances, but I downloaded the J Pol Econ style and applied it a mock document.  If the settings are changed to those shown in the first snip - and you separate your chapters by inserting section breaks, you should be able to get the full footnote form the first time used in the next paragraph.

If you make the change in the footnote setting in the second snip, you should remove the auto-generated bibliography, which you say you don’t want.

In my handling of the footnotes, I am not sure I see what you are seeing for the ibids, but maybe my example is not what you showed.  I chose two chapters in the same book in my library.

I attach the otherwise unaltered output style with those two changes.

I assume you are using book chapters to input these records.  – I also am not sure how you are including the cited pages in the footnotes, but you should be editing the citation and putting them into the  “cited pages” field, not having multiple records with individual pages.  This is different from how we generate the book chapter bibliography entries in the sciences and if you don’t include the full bibliography then the actual page numbers that span the chapter itself in the book will never be given in your thesis.  They would have appeared in the bibliography of this output style, but not in the footnote templates.  Are you sure that will be correct?  If you don’t include the bibliography that information will be incomplete if someone wanted to request a copy of that chapter from the library.  They might assume it was only one or two pages that you provided as “cited pages”. 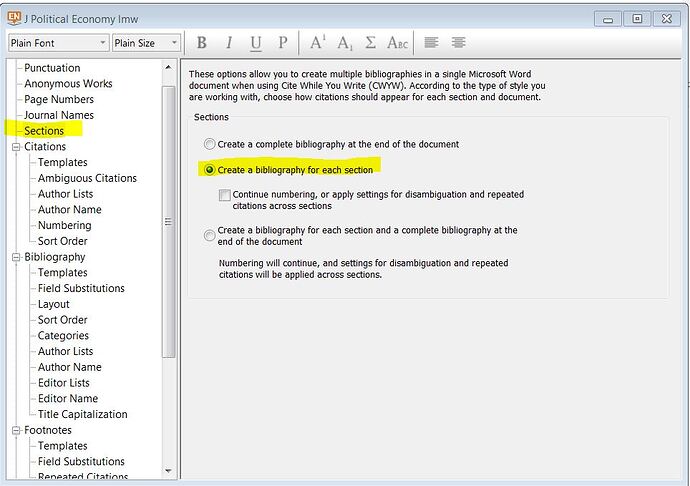 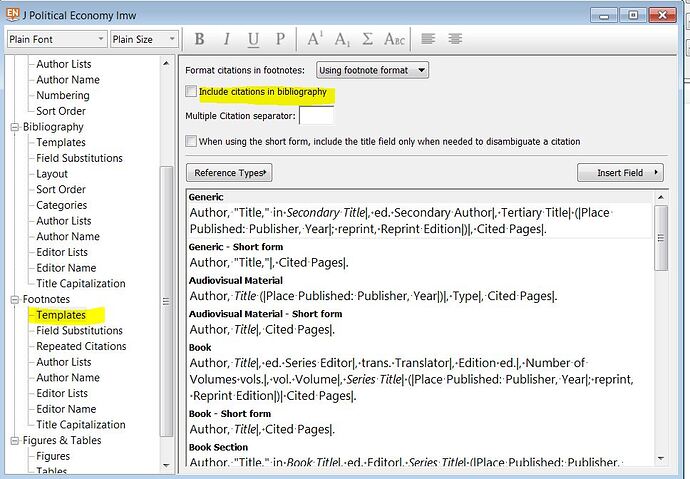 I can only attach 3 files per message, so here is what the text and footnotes looked like in my test in the 1st “chapter”. 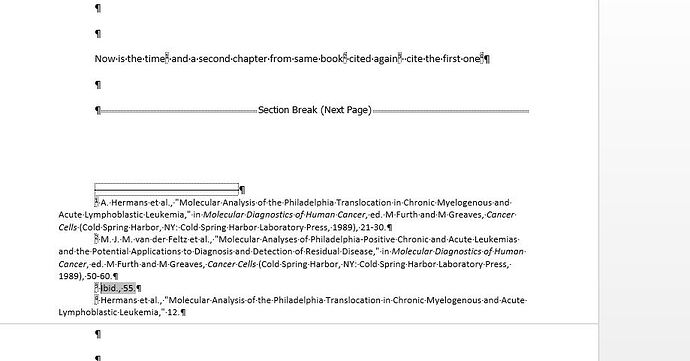 Tried one more test, more acurately reflecting your same author scenario, and - yep, it was the short version.  – That appears to me a bug, because if the chapter title and pages don’t match, it shouldn’t be treated as a repeat.  – I think you should report it to the developers.

Beta or Moderator following this thread from TR?

Thanks for this! Sorry for my slow reply. Dissertation is submitted!

I really appreciate you looking into it - that was super helpful. I will report the bug!