Please help! I am desperately trying to format my manuscript, only to realise that EndNote apparently doesnt like the squiggly brackets being used for other things, like the indexing codes in Word’s index function. I’ve got around 950 references (~930 formatted and ~20 unformatted), and around that many index entries, and the manuscript is now stuck. It reformatted the intext citations so now they are all in parentheses, but won’t re-format the bibliography, so now they no longer match. And it won’t unformat. Everytime I try anything, it just crashes and tells me that EndNote is keeping Word from responding.

Using EndNote X9 (Bld 13018), Word version no idea, used to know where to find this but they moved it. Modern version anyway. Long-time EndNote user (since version 1, which wasn’t even called 1 at the time!), but never run into anything quite this difficult. Fingers crossed it’s less difficult for you! Thank you in advance!

You can change endnote to use any pair of unique characters as the temporary citation delimiters.  Square are more commonly used for other things, but might work in your case or try $@ as a pair?

You can change the endnote preferences to use an alternate pair (see capture2 attached image) or you can try to edit the temporary citation delimiters from the bibliography setting in the document (see capture.jpg attached) but that might not work if it is crashing when you try to open the document.  Try turning off auto formatting on the endnote tab before it tries to update the citations. 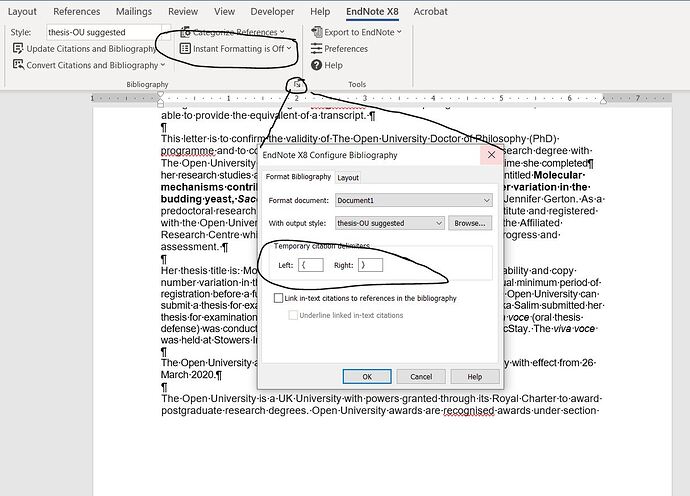 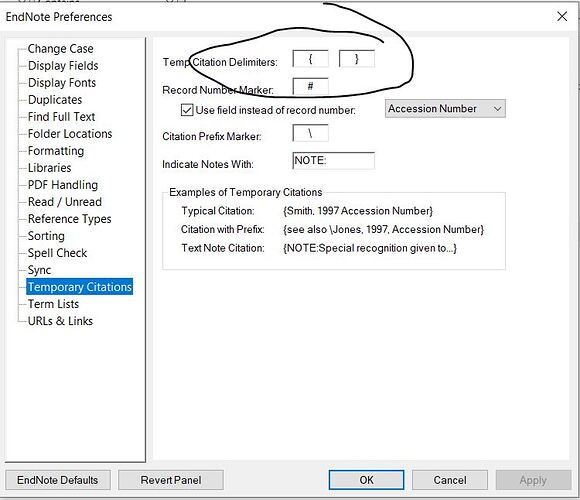 Ah, brilliant, thanks Leanne, I’ll give that a try. At the moment I can’t get it to unformat the citations, but I’ll see if that works… fingers crossed… cheers, L