Endnote references not being added correctly

In my word document, the references are being diplayed with numbers inside brackets, such as: “The effect has been demonstrated to occur on different body sites [6].”

However, sometimes I’m working on a paper and when I try to insert a new reference, it shows up not as a number, but in the format: “This effect has a visual analogous [Geldard, 1985 #21]”. When this happens, I also notice that the Reference list at the bottom of my paper does not display this new reference I have added.

I have no idea why this is happening, and I don’t recall changing any spec in my endnote to make it work like this. Does anyone know how to fix this?

For some reason, your settings are to have instant formating off. (see attached image of the endnote ribbon in word).  you can turn it on from that option, or  you can update using the “update” option (also highlighted in the attached).

I would highly recommend that you not have your temporary citation delimiter as square brackets, but use curly brackets., unles that conflicts with something in your document. This is because endnot might start trying to interpret your square backeted numbers as endnote citations again.

There are two places you can designate this – the best place to change this is in the preferences, temporary citations setting - as it  is global, but you can also change it from the bibliography setting in the word document (circled in red in first image) and change it in the dialogue that opens (second image attached). 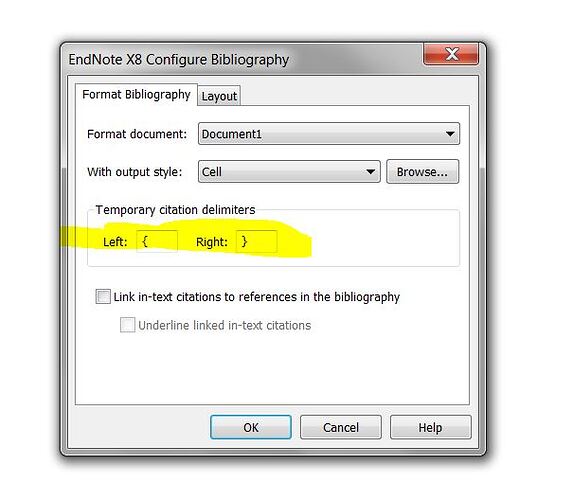 Thank you for the information! Instant formatting was really off, for some reason. After reactivating it, endnote started to read the references again.

I’ve had issues with the square brackets before just like you mentioned, but unfortunately that’s the publication standard format, which is why I have to stick with it too.

Square brackets are required for the output style but not for the temporary citation delimiters.  Those are two different things.

I have the same issue. i have followed the advice you have given here but still the problem remains the same. the citation appears in the strange style with no reference or biblography in the end of my thesis. and it is appears iin the curly brackets instead od parenthesis plus there is hashtag and a number within the curly bracket as well.

Hello.
I had almost the same problem and thanks to your advice I found very quickly the solution.

I also have the problem described before with my reference added as:  {Kulesa, 2007 #782},… but I have seen that the instant formating is already on… what can you suggest me to do?.. I have word 2016 on mac.

Hello… I am having the same problem as reportes before with refence added as:  {Kulesa, 2007 #782} … I have also seen that instant formating is on… what can you suggest me to do to have my document well referenced?.. i have word 2016 on mac… regards

And you have an output style selected on the ribbon (that exists) and have you tried hitting the update citations and bibliography button?