Convert an citations in an existing document to be EndNote X7 compatible.

I am part way through my thesis, which up until this point I have been using Mendeley as my reference manager. I now find that Mendeley is unable to separate reference lists by chapter, so having read that EndNote can do this, decided to switch. I can import my library no problem, but how can I make EndNote read and then manage the citations that I have already inserted into my documents?

Unfortunately, according to a Feb 07, 2013 response from Mendeley support to a query:

“…there is no way to edit Mendeley citaiton [sic] in Endnote or convert them to an Endnote compatible format. You would need to fully remove and replace them in your document…”

At this stage maybe the safest work-around might be to divide up your thesis so that every chapter is a separate file. That would mean each chapter ended with its own reference list and you should be able to use Word’s ability to set the starting page number of a file to get the page numbering right.

If you wish to forge-on with EndNote you’ll need to: 1) export your Mendeley library and import the references into EndNote, then 2) use EndNote to insert citations in the document (replacing the Mendeley citations).

1. To convert your Mendeley library to an EndNote library refer to the knowledgebase article http://endnote.com/kb/108063:  “Transferring records from Mendeley Desktop”.

2. For a quick tutorial on EndNote X7’s features including inserting citations refer to the training video “How to use EndNote in 7 Minutes” at http://endnote.com/training ,

“whitebloodcell” indicated they knew how to bring their Mendeley library into EndNote, and that is a fairly easy process.

Then they would remove the Mendeley field codes (this is an option offered in their “Export” option within Word). This new document can now be used by EndNote’s CWYW.

Hi, I am very interested in understood better how to put endnote reading and updating references added to a document using Mendeley. We are a research group in academia and some of us use Mendeley and others Mendeley. When we have to write papers together it is painful because we have to reinsert every citation manually. For 10-20 citation it´s easy, but for 50-70 references is non-sense!

Can you detail how it is this temporary layout you are talking about?

I don’t use Mendeley, but if the citation in the document can be represented as below, endnote will be able to match and update the citation.

[firstauthorsuname, Year unique identifier}  (I use the PMID as the unique identifier, which is downloaded from pubmed into the “Accession Number” field)  Endnote can be also set to use this identifier in temporary citation preferences (see attached image for that menu).

multiple citations are separated by a semi-colon inside the curly brackets.

I keep auto formatting off - until I want the endnote generated citations.  Before sharing back with a Mendeley user, ensure that you have reverted the endnote citations/bibliography back to “unformatted citation” (NEVER TO PLAIN TEXT!)

also keep backups, as if you forget and the fields get erased, you can ask word to do a compare documents and get the unformatted versions back, using judicious accept and reject during the word review changes process. 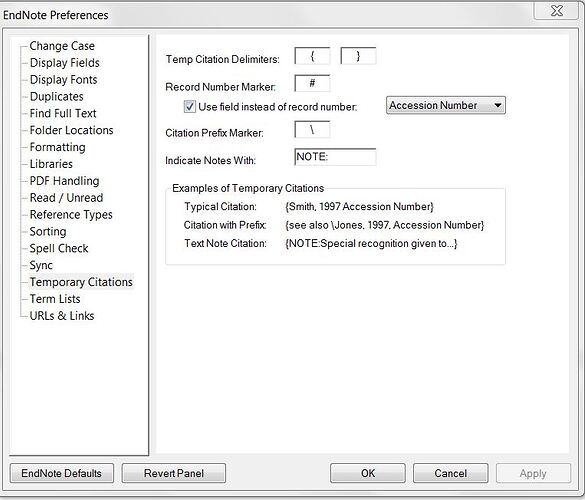