You can try the following steps be sure to make a backup of the document first:

unformat using the instructions for your versions of Word and EndNote:

Word 2013/2016 Win with EndNote X7: Go to the EndNote tab and choose the “Convert Citations and Bibliography > Convert to Unformatted Citations” command.

Word 2016 Mac with EndNote X7 and later: Go to the EndNote tab and choose the “Tools > Convert to Unformatted Citations” command.

Word 2007 with Endnote X and earlier: Go to the Add-Ins tab and choose the “EndNote > Unformat Citations” command.

Word 2008/2011 with EndNote X5 and later: Go to the Tools Menu and select “EndNote > Convert to Unformatted Citations” command.

This should revert all the citations into the temporary citation format and remove the reference list from the end of the document. Then, format the document. EndNote will pick up the reference information from your open library or libraries, and the changes will be picked up.

if TMartin’s solution doesn’t help (or I would probably start with this first, if you haven’t started following those instructions), I wonder if you are having the problem of multiple similar records where Endnote thinks something is a duplicate, when it really isn’t.  Try turning off the “merge duplicates in bibliography” in Endnote preferences. (see attached image) 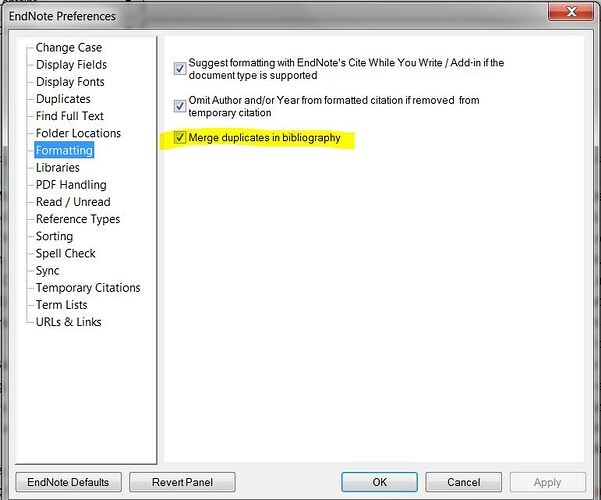