Hi, often when I am typing a name in the author field, the first letter repeats itself as a lower case. So instead of getting,

This is very annoying, esp as it meand Endnote does not recognize the author. Any ideas? I have X5 and Moc OSX, the latest.

So you think it is an Endnote bug, or you want endnote to autocorrect it somehow?  I probably don’t enter authors enough to have noticed it, if it is a bug, but I just tested it on a windows Endnote, and couldn’t get it to happen.

Thanks, Leanne. I guess since it doesn’t happen in any other programs I thought it was an Endnote bug. I looks like it does in the attachment. Notice the lower case ‘j’, which I did not type. I typed an upper case ‘J’, but both appeared. Since I’m not a touch typist and have to watch the keyboard it’s even more annoying! 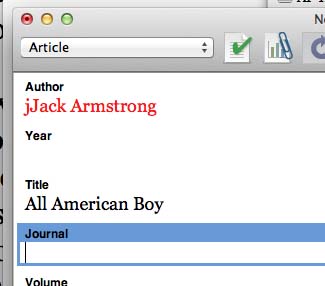 “eSmith” may have been added to the Authors Term List so you might check the list and delete the entry. (Go to the toolbar, select Tools > Open Term Lists > Author Term Lists.)

Nope, but an interesting idea. Besides, you’ll notice in the graphic that the name is in red, so thtmeans it isn’t rcognized fro the lists.

From the EndNote Help file, on entering Author names:

So it is working as documented. There is a Suggestion area of the EndNote forum, if you would like to see this changed, you might want to post a request to change this. Seems inconsistent and certainly unexpected.

I think the complaint is that Endnote seems to be inserting letters that weren’t typed?  - not that it isn’t finding matches to autoinsert.  Do other Apple users find this to be the case?

You may need to contact Technical Support about this. This is not the expected behavior with EndNote X5. It might be an issue with the authors terms list, the library or the EndNote preferences.

As a test you could open the Sample library, which is in /Applications/EndNote X5/Examples and check to see if it gives you the same behavior. If the Sample library works properly it might be an issue with some corruption in the index of your library. EndNote has a recover library command under the Tools menu.