How to edit a string cite in endnotex4

Hi All & Thanks in Advance

I recently upgraded to Endnote X4 and have not yet figured out how to edit i.e. insert page numbers in an already existing string cite.

The problem I’m having is that I have several string cites (a single footnote containing many different references) where I neglected to insert the page numbers immediately.

The Edit & Manage Citation function only show one citation, seemingly randomly chosen, and I’m therefore unable to insert pages numbers in the others.

This is drivng me nuts!!! And was not a problem with earlier versions of Endnote.

From the footnoted citation, after choosing “edit citation” (ether by  a right click or if it doesn’t appear, then from the menu/ribbon) have you moved to the “more” option?  You should end up in the list, with the one (or the top of the group of refs used in that footnote) you were in, highlighted?  That is the citation you would be adding the page numbers to in the pages field (assuming your endnote output style correctly implements the “cited pages” field).

ee attached image.  (this image is from word2003/endnotex4)

Thanks a million for the response!  However, it has not solved my problem.

When I follow your instructions the box which comes up looks a little different from the image you attached.  The desired citation is not highlighted.

Hope I’ve been clearer this time. 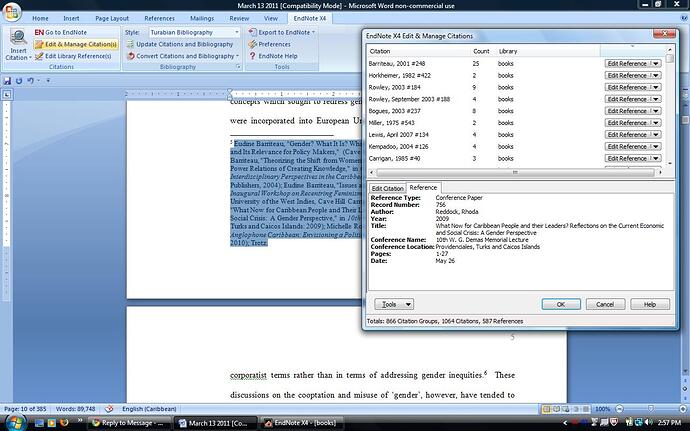 Thanks a million, Leanne.  Your solution worked!  Well, somewhat…this way of editing is definitely not an improvement on EndnoteXI.

Anyway, thank you so much for your help.  It has been a real life saver!

“Only one of the many citations appears, seemingly randomly chosen.”

According to your screenshot, there is a subtle difference between Leanne’s window and yours.  If you look at the column headers in that window (Citation, Count, Library, “blank”), you’ll note that there is a little triangle in just one of them.  This indicates the sort column in these list views.  In Leanne’s, the triangle is on the Citation column.  In your screenshot, the triangle is in the blank column above the “Edit Reference” buttons.

You can switch the sort column by clicking on the desired column header.  To get to Leanne’s screenshot, where order of citations makes sense, and your grouped citations appear together, click on the Citation column.  The triangle should appear there, and the window will look the way it usually should.  Right now, the column is sorting based on the button column, where all the entries are identical buttons, so you end up with an effectively random “sort”.  Not sure how the button column became your sort column, but clicking on the Citation header should fix this part of your problem, and hopefully make it easier for you to edit your citation groups.