I wonder whether anyone has encountered EN’s tendency to de-capitalise an Ibid., which replaces repeated data in a subsequent footnote, where the footnote begins with a tab.

I am using EN X4 and Word 2010 (though I don’t think anything turns on the version of Word). My EN style is set up to replace repeated data in consecutive citations with “Ibid.|,○Cited Pages”.

The context is as follows. I like my footnotes to line up on the left-hand side. Word doesn’t let you specify the character that follows a footnote reference: it just automatically inserts a space. Accordingly, I have a hanging indent in my footnote style and just tab in the first line (actually, I have a macro that replaces the automatic space with a tab but the result is the same).

Without the tab (i.e., with the automatic space), EN correctly inserts “Ibid”. However, when I insert a tab, EN reformats this to “ibid.”. Obviously, EN is trying to be helpful by determining that the reference is not at the beginning of a sentence and so should not be capitalised. Of course, EN happens to be wrong in this instance, so, while this is a very useful feature, I would like to switch it off – only I can’t find anything in my repeated citations or capitalisation settings that would permit this.

I have explored a few workarounds. First, I note that it makes no difference if a space is inserted after the tab: EN still removes the capital. Second, I tried inserting a bunch of hard spaces instead of a tab but EN was wise to this as well and removed my capital. Third, I tried fooling EN by setting up a macro that increased the character scaling of the automatic space to 600%. Unfortunately, it wasn’t possible to adjust my hanging indent in such a way that the footnote lined up consistently (I think the explanation for this is in the justification of the text). Finally, I tried inserting a full stop in hidden text after the tab. This worked manually, and on the first run of a macro designed to step through the footnotes but – probably because of my lack of skill – I haven’t been able to write a macro that, on a second or subsequent run, doesn’t destroy the footnote reference.

Having reached this point, I thought I’d seek help. I apologise if this point has been noticed before, though I couldn’t see anything in the archive. (I haven’t contributed to the list in a very long time but it was pleasing to see a few familiar names still cropping up).

Any advice or assistance you might be able to offer would be much appreciated. 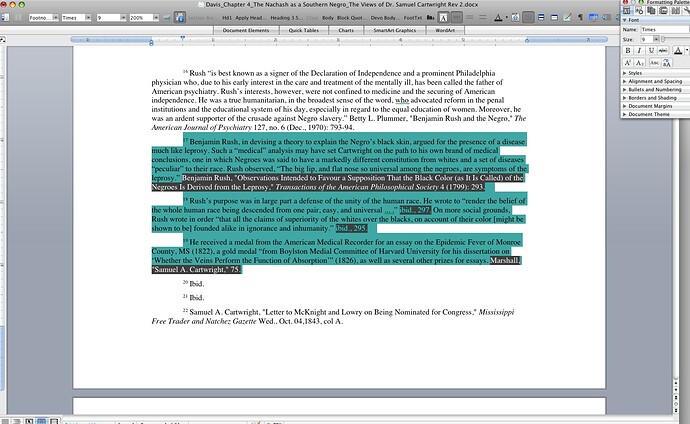 Has anyone figured out this capitalization issue? I’m finding EN will only capitalize Ibid if it’s at the very front of an endnote. Even if it follows a sentence w/ a period, it’s putting ibid in lower case…

I’d also like to know if anyone has suggestions to fix this problem.

I had the same problem, and I solved it this way (although not perfect, but still working: If you put a field “Link Adjacent Text” in front of Ibid. in the repeated Citations section (in the Edit output style menu), the first letter will be in capitals. However, it will mark a space, so the footnote might be a little shifted.

Hope it helped and didn’t come to late.

This is a very helpful suggestion, Francis – thank you.

One slight improvement is, instead of inserting a link adjacent text, to insert a zero-width space at the start of the repeated citation formula. This character is in the Unicode set (U+200B), though you may have to copy and paste it from the Character Map. As the name of the character implies, it occupies no space and thus has the advantage of not dislodging the footnote.

The problem with this workaround, however, is that it results (if Ibid. is capitalised in the repeated citation formula) in the capitalisation of Ibid. in all instances: i.e., not just at the start of a footnote but also if the reference is inserted after a colon, mid-sentence, etc…

In other words, this adaptation of your solution tricks EN into leaving the capital as entered but prevents the operation of EN’s otherwise useful functionality of de-capitalising it when it thinks you’re mid-sentence.

I also have a capitalization problem with “ibid.”  With X5, “ibid.” is correctly capitalized after a regular period.  Yet when a quotation mark intervenes between the period and “ibid.” it reverts to the lower case.  Is there a way to tell “ibid.” when to capitalize?  I have noticed the work-arounds, but am not sure if they are helpful in my case.

My fix would be to pretend I am British and use the British version which would place the period after the "!  – but really - let the copy editor sort it out (or they won’t have a job!)  or fix it as the last step before submission.  We really spend entirely too much time worrying about these things when we should be focusing on the content!