according to a referencing guide,

I couldn’t figure out a way to do the [ ] bracket with the abbreviation of the author.

Leadership and change in schools have been major topics of discussion for several years (Fullan 1996a, 1996b) and this conference…

how do i place lower letter case alphabets behind immediately after the tear?

The easiest way for both the first in-text and the subsequent in-texts, are to hide the author and insert the text you want, as you want it to appear in the Prefix box (complete with a trailing space). Otherwise there is no way to insert new text between the author and the year.

For Author yeara and yearb, you edit the style (Edit>edit output style>edit “your current stylenaname”) to disambiguate the year.  Those settings are in the citation settings, Ambiguous citations (see attached).  Unfortunately, endnote won’t combine them unless the whole author list is identical for two records, and you may need to hide the author for the second instance to get them to appear as in your example.

Remember to save as to a new name, and then you need to make sure that newly named style is used in the Word document on the Endnote ribbon.  Do not use the same name, and the first time you look for it, you need to show all styles at the top of the dropdown list. 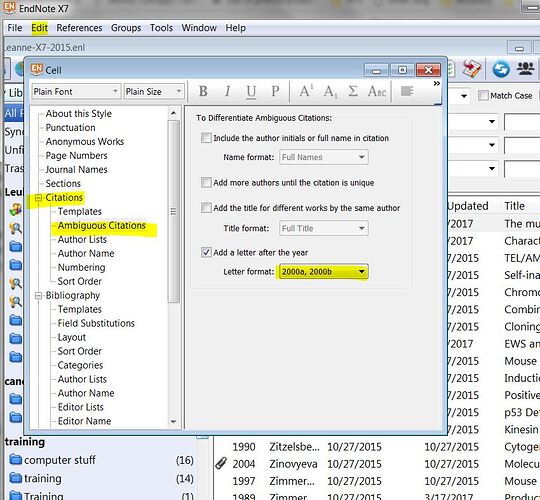 does that mean it is impossible to do it like:

Yes, the only options for first cite and subsequent cites in Endnote, are how the number of authors shown are handled.  (and the second cite you wouldn’t want 2016b - would you?).