I make it clear: when you type {#<recordNumber}, assuming “#” is set to be the “Record Number Marker”, it is looking for the reference having <recordNumber> as record number. I want to type {#<myOwnReference>} in place.

I know the “use field instead of record number” and I am using the Label field to store my own ids, but it is not working the way I just described.

Why, is it not working the same way as with record numnber if I “use Label field instead of record number”?

A workaround will be to have a way to replace the content of recordNumber with the one of a field (Label for example). But, in that case, RecordNumber should be alpha-numeric and this functionnality should test the unicity of new “recordnumber”

I guess you are asking endnote to use the # to also know it is a label, but the # isn’t a part of the label field?  You would need to edit the label field so it includes the symbol as well?  (via Tools, change/move/copy fields)

I am just asking EN to let us use the “Use field instead of record number” (in EN’s Preferences/Temporary Citations) to let us really use the selected field as if it were the record number.

I hope I made it clear

I don’t understand the subtlety, but I am a user and not a developer and have no association with TR.  I solve this by editing my “label” - which I created/copied from my record numbers to label field, when that feature became available.  It has an LMW “tag” in front of the  number and I use that when I use the label instead of the record number (it adds it automatically, as in inserts the whole field).  Otherwise, Endnote would use the wrong information if I had an unformatted document that I opened with the “use label” option rather than the “use record number” option for temporary citations.  That could be a disaster.

I don’t see the subtlety either

Thanks for your answer, I will try this and I let you know if it fulfill my needs

Leanne, it is still not working on my EN.

Could you give me a clear example please, so that I could better see what you are doing

I have attached a jpg file to better make my point. In this EN.jpg, you will find 8 screenshots (EN1…EN8)

After changing my preferences like in EN3, when formating {¶SutW-3}, I have a disappointing EN4. Why ? I want to use Label instead of recrod number… Just as it is written in the preferences pane…

A workaround would be to set labels as in EN5, but when formating {@W-6} I have a choice to do between two references (EN6). I can bracket my labels as in EN7, but (1) is is boring to write {@W-6@} and (2) I have to validate the reference, the substitution is not automatic (EN8)

Do you know another workaround ? 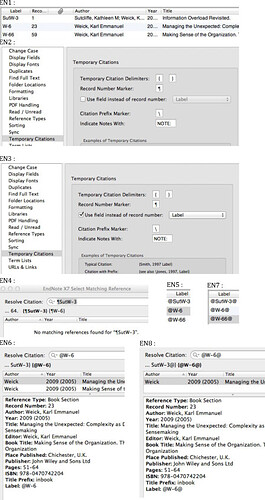 okay, I guess I see your problem.  The developers need to make the fields in use as “exact” matches.  THIS IS A BUG THAT SHOULD BE REPORTED.

For your example text “match” W-6 and W-66 are both matches to W-6.  I always insert from CWYW, so the two are not matches because they also have the Author and the Year to distinguish them.  In your case you also have the surname being used as the label initial, and the author and year happen to be the same too.  Hence they appear to have two matches.  In addition, my early citations are rarely used, so it isn’t so much of a problem, most of my citations in use are in the thousands.

By the way, changing the record matching character has no effect on the alternative field in use.  Note the examples after switching from record number in use to label.

The only way this check box gave an incidence is when associated with Author and Year, as shown in the preference pane’s example.

But I want it to work exactly as a record number. I want EN to replace automatically the new reference by the citation even when I merely write {¶LabelRef} (and not the whole {Author, Year, ¶Label})

True again.  Having just the Label pulls up the matching dialog even if it is unique.  I take it you type in your label manually into the temp citation, rather than inserting it from Endnote?  I guess my library of citations is just too large - and I find using CWYW to be more efficient.  But you have this thread in the right place to bring the wish to the developers attention I guess.

> I take it you type in your label manually into the temp citation, rather than inserting it from Endnote