So we have this odd issue with endnote on Mac High Sierrea using Word from Office 365. When you insert references, everything’s fine. Then when you unformat references, and later on try to reformat them, it does not work. It instead recognizes all the unformatted references as a block of regular text like a note instead of endnote references. Any suggestions?

you need to convert to unformatted, where they appear as curly bracketed {Author, Year #recno}  or maybe the pubmed accession number (which is my preference)  not Plain text.

Does it convert to curly bracketed text?  And are your Endnote settings set to use curly bracketed delimiters?  No one is opening the document with other software, are they?  Google docs or open office will definately strip the fields.  No one is running the windows “remove field codes” commands?

I have never heard of “convert to unformatted” converting it to a document that endnote couldn’t read again, although if the library isn’t available, Endnote might not be able to format the document as it is missing the database files to do so?

I just finished checking each of these, and they do not seem to be the issue. Maybe the library is unavailable for some reason, even though it is possible to import references from it? Would you suggest trying to rebuild the library?

Is it possible to let me see the document it self (sorry I said library but meant document)?  You could PM me (I am not endnote support, just another user).  I can look at the document if you shared it on a dropbox folder with me and see what it looks like?

Thanks! I’ll send you the files, two versions of it jsut for an exampe. Here are screen shots in the meantime. It happens with any word file created, so we just made a new word file, insert a few referneces (the file titled 2.docx) and then unformat them (the one titled 1.docx). Once we try to reformat them, they do not get reformatted, they end up as a block of text. 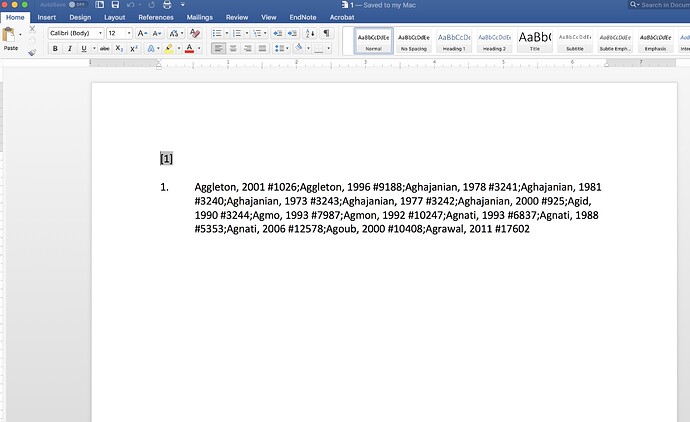 Sorry, how do I send a PM in these forums? I tried but I can’t seem to find a link to it.

I will need your output style as well, but that isn’t what happens when you use the endnote tools to “convert to unformatted citations”  see first attachment for how you do this).

In second attachment, is what happens when you convert properly.  Below is formatted, above is after converting to unformated citations.  – the bibliography disappears entirely and you are left with the temporary citation delimited by curly brackets.  I have mine set to use the PMID downloaded into the Journal Accession Number field, so I don’t have to deal with changing record numbers after syncing.  (preferences setting>temporary citations in 3rd attached image). 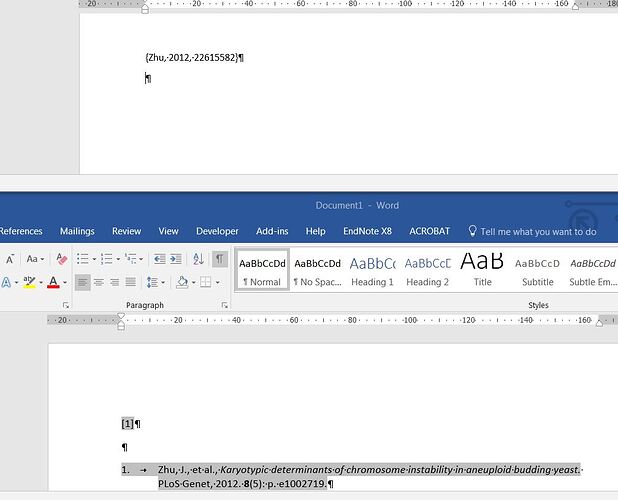 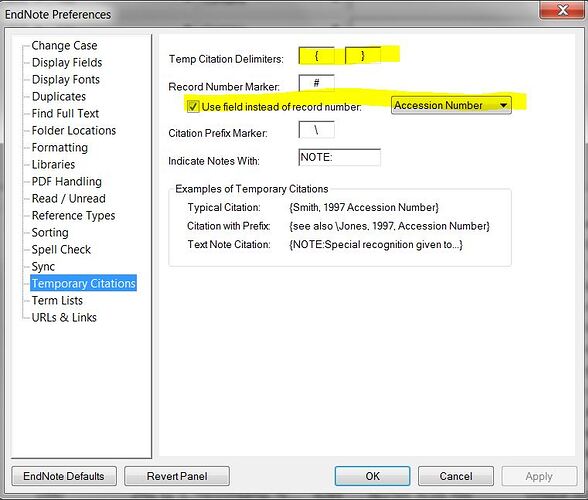 Regarding Capture 3: What happens using this solution if you have references that lack PMID number (e.g. books or book chapters)?

Then Endnote uses the record number in the inserted temporary citation.

but sometimes I will sort on the accsssion number field, and show those that are empty, try to update them (to make sure a PMID didn’t come later) repeat and show only those that don’t have an Accession number.  Then I use the change/move/copy tool to copy the record number to that field and then (using the same tool) add the preceeding hash to lock in that number, incase it gets messed up later - or I need to share the library with others who do want to sync.

Before the PMID option, I also routinely sorted on the label field, and have a code of the original record number for all my references.  I copy the record number there, and then precede it by by LMW and  end with  X  (as sometimes searches for this field pull partial matches).  So I used to use the “label” field as an option.  But the accession number is better and if there are a small number of cites that don’t match because I am collaborating – it isn’t a big deal to go thru those, when Endnote prompts me and choose the right citation.

sorry to bug in but did you manage to fix  it ? i f so how