Short forms for books in which a chapter appears?

Am I right that Endnote (X7 for Mac) can’t supply TWO short forms when two titles appear in a citation/footnote and the (here: book) title has already appeared earlier in the document?

Author, Chapter title, in Book Title. (only the ch., title can be shortened in consecutive appearances; the book title can’t)

You would edit and  use one of the custom fields in the Book section to hold the short book title and edit the short form template to use that title rather than the book title.  You might want to consider one of the other title fields further down the list, like “Translated Title” or maybe “Series Title” if you never have a need for one of those fields. 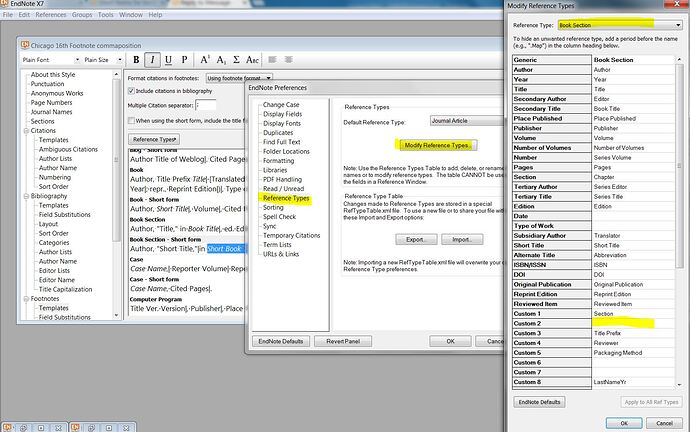 Interesting. Not sure this will work though, but I may be misunderstanding.

Suppose you have 2 book sections both of which are cited. Each will be taken by EN to be the first citation of each section. But in each citation, the book title will appear in full. Only in a repeated citation of either book section will the short title go into effect–and that will apply to the title of that section alone.

Perhaps it’s not appropriate editorially speaking to format the second citation with a short form of the book title (the title that both citations share in this case). But that’s what I was aiming to do, since the second full book title seems redundant given its first appearance in the first citation.

Of course, the short form of either citation would be fine: there only the section title will appear (shortened). But that’s not the problem here.

Yes, I was afraid that is what you meant, and no – endnote has no way to cross ref that the book itself has been previously listed in full.  They are independent records and it isn’t a relational database.