Is there a way of sorting names such as “ten Hove”, “de Cherton”, or “van der Ploeg” under H, C, and P rather than T, D, and V as is required when compiling lists of surnames in English?

Offhand, have you tried adjusting the Author field for each record such that “ten Hove”, “de Cherton” and “van der Ploeg” are entered as*:

Yes I have, but the style I am required to use needs names to be written in the following format

rather than the below as achieved with double-comma (,)

This can be achieved by using a setting in Preferences, called Sorting. Words added to the Sorting list are ignored by EndNote when sorting references. So add van, der, de and ten will cause your author names to sort under the significant part of the name.

names should be entered

ten Hove, John and then you want to edit>preferences, sorting.

add ten, der, van to the author list (see the attached image of the entry window) – but I am not sure there isn’t a glitch with double barrel  (van der)  versions…

oops, see Patti beat me to it! 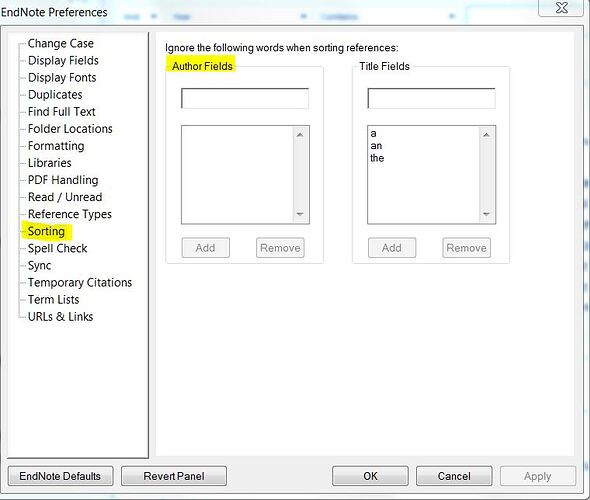