This might be a little long, for which I apologize, but I want to be sure that I have the problem described correctly.

A lot of my references are to papers published in a set of proceedings volumes – so many, in fact, that I’ve created a new reference type that I’ve named “PLSC/PLPSC”, which are the abbreviations used for the proceedings volumes.  I’ve set the fields as shown in the attached screenshot (PLSC-PLPSC.jpg). Note that I’m using the Secondary Title for the Proceedings Name, and that it’s the same field used for the Journal name in a Journal Article reference type.  (Or at least I think it is!)

I’ve gone to Edit>Preferences>Term Lists and made sure that the “Suggest terms as you type” box is checked.  I’ve also gone to the Tools>Link Term Lists dialog to be sure that the Journals term list is linked to the Journal (Secondary Title) field (as shown in the “Linking Fields.jpg” screenshot below). Please note also that the “search terms” process works just fine when I type in the Author field for the PLSC/PLPSC reference type.  It’s just the Proceedings Name/Secondary Title that’s not being suggested.

Thanks for your time! 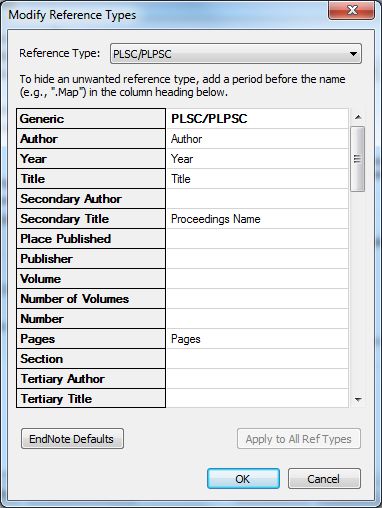 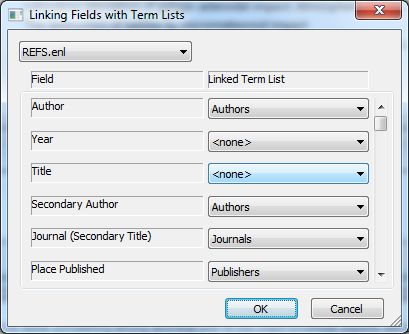 I can’t easily test this, but is the abbreviation you are hoping to pop-up,  in the Journal’s term list?

If so, what if you change the name of the field in the ref type to “journals” rather than “proceedings name”.  Will it pull from the journals terms list now?

Thanks for getting back on this so fast!

Yes, the entries are in the Journal term list. They work fine if I start entering them in a Journal Article reference, for instance.

I’ve tried changing the name of the field to “Journal” instead of “Proceedings Name,” but the problem persists.

Okay.  I decided to read the small print in the help files.  I found this statement:

But I have no idea how they expect you to do that, when there is only one “secondary title” field in the linking fields dialog, as you show.  Would make me think you would need to use a different field for your alternative ref type?  You may need to ask this question to tech support rather than the forum.  Maybe the developers know what that statement above means?  But what is true, is this matches your problem.

Since the info doesn’t seem to be “there” was wondering whether after linking the Journal term list to the Journal (Secondary Title) field if you updated the list with data from those fields? (Go to the Tools menu, select Define Term Lists, select the list, and click Update List.)

Yup.  I ran through that, and no luck, unfortunately.  Nice try, though!..

Thanks for tracking that down.  I think I’m going to contact Tech Support and see what they have to say.  Once I get The Word, I’ll let you know what happened.