I’ve noticed a weird, well, “thing” in one of my word documents. I usually configure my categories without any problems but I have merged several documents together now and I have the problem, that there are several phantom copies in my uncategorized references folder of references that are already categorized correctly. The bibliography at the end of the document shows every reference absolutely correct, but I have sometimes 8 or 10 not shown reference copies in the Uncategorized Reference folder. So here it shows 68 references in my document that has only 23 references. I have unchecked and checked ‘Group references by custom categories’ several times, closed word and Endnote and opened it again, etc. I even droped them a couple of times in the customized folders but they keep reappearing again under uncateg. references.

Thanks a lot for any kind of support! 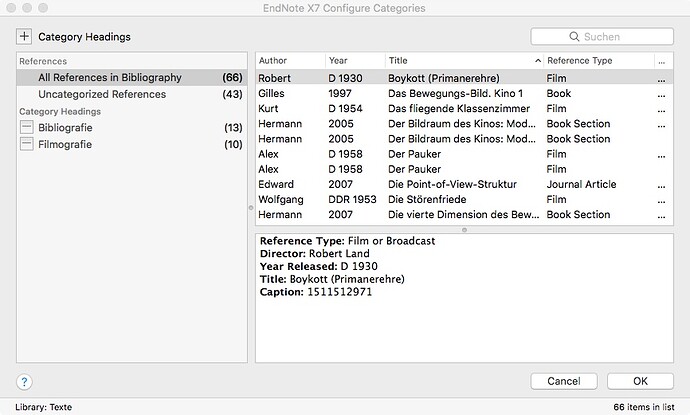 I suspect that the document has “unlinked” some citations from the existing library and they are in the “traveling library” embedded in the document.  You should be able to (make a copy of the document for safekeeping first) - convert to unformated citations, then update – which should get rid of and relink any of the citations to the one in your library which will be correctly categorized?  I don’t know if that complicates matters, as I don’t really use the categorization tools.

Thank you for your advice. Unfortunately it doesn’t improve the situation. After converting the document to plain text and starting to put in my references the same problem occurred again: Already categorized reference popping up with phantom copies under “uncategorized”.

Edit: I just realized, that this is not exctly what you proposed. So I converted the text to unformated citations and updated as you suggested it, but it doesn’t worked either. Same problem as before.

Can you see where the uncategorized version is coming from?  Select them and look at the bottom (where yours says “texte” for the one you are highlighting.  (where mine says traveling library). 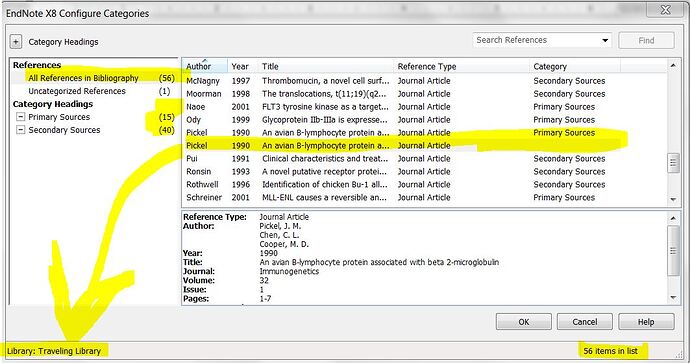 Thank you for your reply. All the references are coming from my only library: texte (pic 1). And i’ve never used a traveling library either. 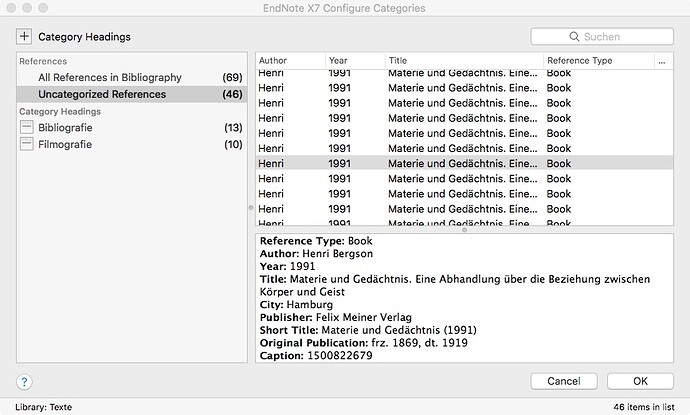 I am stumped and I think you should contact tech support.  You don’t “plan” on using a traveling library.  It just happens sometimes, like if there were a duplicate in your library, you used both and later deleted one, or a colleague inserted a citation from their library or, “it just happens”.  I had 5 in a recent paper, for no reason.  But that doesn’t seem to be your problem, and I assume you don’t have duplicates in your library.  Have you cited that book a lot of times, perhaps with cited pages?  Are they all books that are phantom?

I am really intrigued, and wonder if you would PM me.  (I have nothing to do with Clarivate, just another user who likes to understand things).

Thank you again for your reply.

I tracked down the systematic in the phantom entries. It seems, that every time I insert a reference into my text it creates a new reference entry in the uncategorized folder. So if I use a reference just once, it will only be there one entry. But if I use a single reference 20 times over the course of the whole text, I’ll have 19 references in the “uncategorized” folder - one remains in the right category.

I also tried this with a completely new document and it starts instantly: two times the same reference results in two entries.

there is a problem specific to either your version (I use windows, Endnote X8.1 and Word 365 (16: ver 1710) or your library and I would contact tech support directly.

I don’t see that problem, unless the records come from a different library and show up independently as such in the “edit citation” more, list or are duplicates.  I have citations 1-8 times. 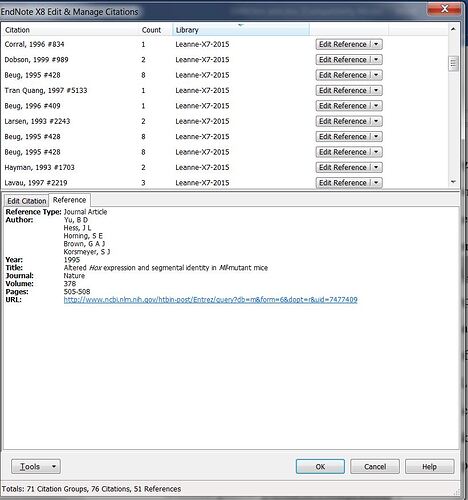