First a critique - inserting Figures into a document with Endnote is gawd awful. There is SO much more simplicity that COULD be happening here… (drag and drop etc.) that said, to my question:

When I insert a figure into endnote and then generate the figures list (if it’s not already set to automatically do so) I get these huge gaps of white space because the figure is a whole page (all my figures need to be on separate pages as a thesis). How do I get the figures to follow the insertion point, but have the text still continue to wrap up to that last insertion point and carry on AFTER the figure inserted? This seems like it would be a total “no brainer”…???

I’ve attached a quick screen pic - the gray space is what i’m trying to eliminate here. You can see where it says “Figure 1” above that, then the big white space gap (in gray) and then the figure, and then the text which SHOULD be following the insertion point of the figure field code. What am I doing wrong? I’ve tried different citation styles .

Thanks for anyone’s expertise on this one. 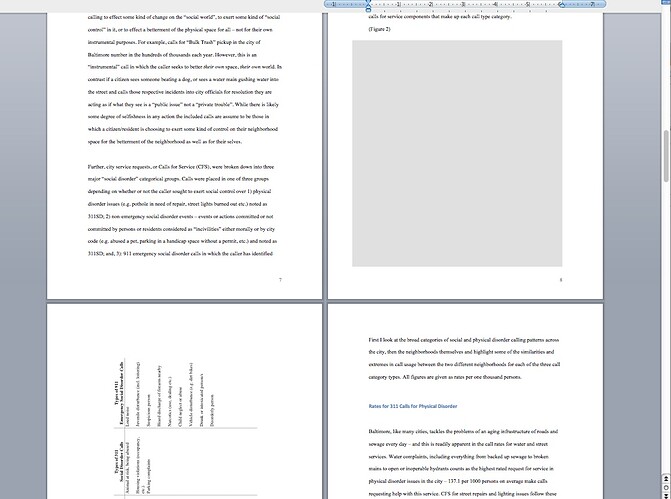 Are you captioning your figures via EndNote?  If  so it may be easier to remove the figure captions stored in the EndNote references and use MS Word instead to insert the captions for you. A search of the forum messages will show EndNote’s handling of figures is not an easy row to hoe.

If the captions are done in MS Word, it’ll be easier to generate a final list of figures which display the page numbers corresponding to each figure appearing in your thesis.  Moreover, you can easily update the Figures list along with the page numbers later if you happen to rewrite sections of your thesis which in turn affects the figures’ pagination.

You could still  use EndNote to insert the figures but then switch to MS Word for captioning.

Thanks for the reply CrazyGecko… I’m not so concerned about the captioning part (I can see how it would be easier to enter text later sure) - really it’s the pagination part (even generating a list later isn’t much of a worry). But if it’s just going to look like crap then I don’t see the point of trying to use Endnote at all (save it will number the figures - WHooo HOooo! lol).

Any ideas on dropping the white space? Is it a word preference on the wrapping of text on that end maybe?

I’ve found what I believe is a functional though rather ugly solution (and I see now why you’re suggesting using Word for the captions then). See this link:

My problem is I have upwards of a hundred of these to do… what a PITA.

As shown in the attached image of the Japanese wood print, you can decrease the amount of “white space” between the (Figure 1) notation and the actual figure by adjusting either or both (depending upon your preferences) of the default settings for: 1) “Figures”, and 2) “Separation and Punctuation”.  I suspect the latter which allows changing the number of blank lines above and below the figure is what you want to do.  As shown in the wood block illustration, the number of blank lines was set to zero (0) which is probably too low - more likely “1” is the setting to use. Close the output style when done and note the changes will be saved as a “copy” so you’ll need to adjust both EndNote and MS Word to use the modified style copy instead of the original file.

Also note that when inserting the figure, your cursor should be on the same line as the referenced sentence - not placed on a new line.

Word can auto number figures and is a much more elegant solution with much more flexibility.

Thanks for that info CrazyGecko - will take a look at it much appreciated.

As I learn to explore a side of Word I’ve not before can you give a little step by step advice then? I have my figures as pdfs, they are all one full page each. What order should I do the “insert” and “caption”  (i.e. should I create a caption first and then insert, or vice versa) and while ‘elegant’ I’m sure to the initiated I’m not clear on how to keep the Figure/Table field connected to the actual graphic without messing around with paragraph “keep with next” etc. As I mentioned above I found this link:

but I can’t imagine having to configure the paragraph settings a 100 times over for my phd outputs and graphics - what’s the “elegant” way? (you can just point me to a source if you know - MS Office I hope isn’t the one given their track record of “explaining” things is, er, a little “lacking” on the best of days).

Thanks for the help!

I still hold firm to my first posting that captioning and numbering figures is best handled in MS Word, not EndNote.  If your figures are pdfs, the pdfs must be converted to a file form that can then be inserted into MS Word.  Once the pdf-now-converted-image has been inserted into MS Word, captioning the figure can be done via the ribbon (for Word 2007 and 2010) in the “References” tab.

For more information on captioning in MS Word, click the Question Mark (Help) button in the Word toolbar and search for: Caption.

I can advise, but better off forum.  I will PM you with my email.  It really depends on setting up a style that auto applies the paragraph settings you want to apply, to avoid setting each one individually.

thanks to both of you for all your help. will have at it. if I could have split the “accepted solution” between the both of you I would have. cheers to you both.