I have typed over 60 pages of a report in Word 2013 over the last fortnight (approx.), building Group called Images containing only Figures within an EndNote library (with other Groups for other Reference Types such as Journal Articles, etc.) as I went along.

Using online information including third party sites I worked out how to insert Figures into the text using EndNote (simple) and generate a Table of Figures (also simple). I have inserted 16 images without issue.

Suddenly, though, the exact same process doesn’t seem to work, and I am at a loss as to what might be wrong, or what I could be doing wrong (or what I could do to fix it in the case that some kind of a software bug is to blame, given that I do not have “administrator” rights on the university IT system).

I want to insert another Figure - it should be Figure 17. When I follow the steps (place the cursor where I want the Figure, click the Insert Citation dropdown, click Insert Figure, enter search text in the popup, select a Figure and click Insert) Word/Endnote inserts the text “(Figure 16)”, which is incorrect. Further, Word/Endnote does not insert the image, and does not update the Table of Figures. Finally, even though the Figures in my Library have Captions, some of these have inexplicably disappeared from the Table of Figures.

To say the least, help would be appreciated!

I have also tried Recover Library and Find Broken Attachment Links from the Tools menu - to no avail.

To test whether the problem might be a corrupted document first recheck the Endnote record for Figure 17 to confirm the entry is correct then create a new document and insert all 17 figures – if the figures, captions, and List of Figures are correct then something might be wrong with your original document. If the problem appears to be in the original document then 1) troubleshoot for problematic field codes as outlined in this knowledge base article http://endnote.com/kb/81143 and 2) check for any insertion of section or page breaks occurring before the place where Figures 17 is meant to be inserted and delete it.

Personally when it comes to figures, tables, and charts I use Microsoft Word’s captioning function with which generates “Lists” with correct pagination. I find MS Word provides greater control and functionality and just use Endnote to insert only the image.

I am not sure you can “unformat” a figure, so if you do the steps recommended by CG, do so on a copy of the document.

I assume you have tried the update citation and bibliography “button”?

I would check with tech support to make sure there isn’t a limit to the number of figures in a document.

This was a feature they tried many versions ago, which was not very popular and they have not spent any effort on improving it, as it wasn’t used.  I haven’t used it, so I really can’t help trouble shoot it.

This happens whenever I re-open the word document I am working on.  I am not sure what is causing it.  Not all figures or tables are deleted, but it is annoying to have to re-insert each figure or table every time I start working on the document again–the same document.  HELP!!! 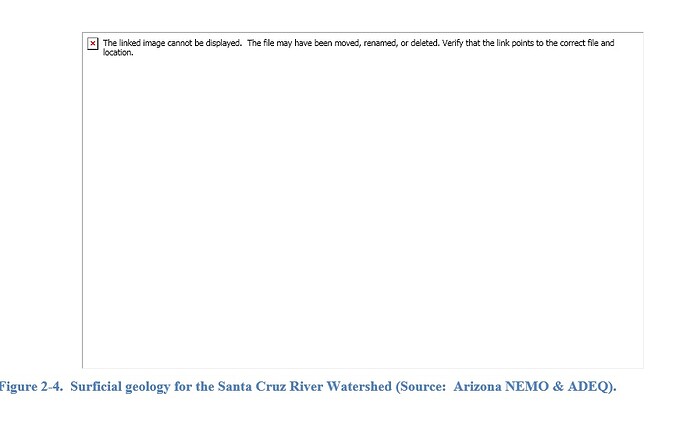