I have edited my output style (APA 6th copy) to look like (Ellis et al., 2000) when there are 3 or more authors. Then EN keeps showing it in the body of the Word doc as Smith, Jones, Chen and Green, 2009. I dont want this.  I must have missed something in changing the style. as when looking at the style it says if more than 6 authors, list the 1 and et. al. others.

It is easiest to help, if you attach the style you edited.  But there are several places you could change the “author list”

In the citation, you have two places to change it in the citation.  The first time it is cited and subsequent times the same record is cited.

From your example, I assume you want to change the number of authors were cited and therefore both first time and subsequent citings must be changed.  If you want the record to be Surname, et al whenever there are 3 or more authors, the number should be “3” or more in both places.

You should save this to a new name and then change the manuscript to utilize the newly named style in the word document.

Also - it is not really a good idea to give it the same name as the original, because it will get confusing as to which style you are using, the old one, or the new one, since they have the same basic name and live in two different locations… 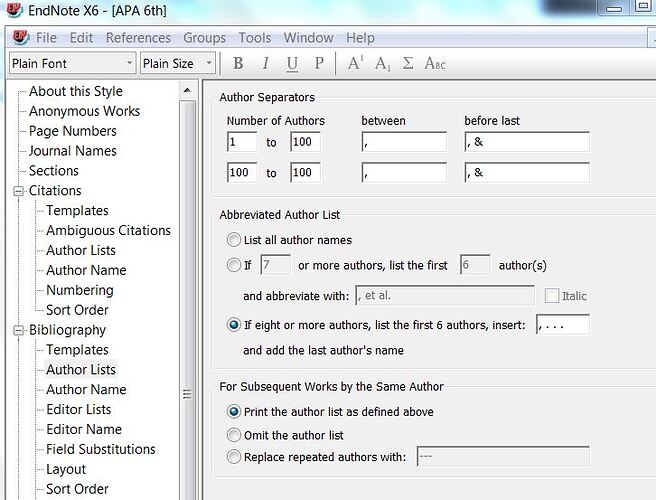 Thanks for your reply Leanne,

I have done what you advised in both first time and subsequent in the Citation author list and Bibliography changing this to 6 or more authors, list the 1st one and abbreviate with et.al. but this does not appear to change within my document as I would like such as Smith et al., 2009.  Can you advise me further.

Please attach the edited style you are using to the reply message.  It is likely living in your Documents folder/endnote/styles/ folder.

When exiting the APA 6th dialog box after modifying the settings to 3 or more authors the changes will be saved to a new file named: APA 6th Copy.  Did you: