can i get the numbers assigned in a word document reference to be shown in endnote?

The subject kind of sais it all.

I would like ot see the references in an endnote group numbered as they are in a word document.

can that be done?

Not to my knowledge.  Perhaps you could elaborate on why you would want to do so? This would be a dynamic number, changing whenever you move or add citations?

You can access the record in the library directly from the edit citation interface in word?  The document designates the number in the bibliography?

Thank you for your reply.

The problem is that i am finishing my phd thesis. I have just short of 200 references (lets not open that discussion right now) and I have to late in the process found out that i have used endnote wrong. I have search pubmed everytime i needed a reference and used the CWYW option, but without instant formatting. This has resulted in a few of the references being numbered as reference eg 4 in one segment and than later in the same document numbered as reference 15 in another segment.

Hope that clearified it a bit?

So you have multiple copies of the records in your thesis library?  Instant formating on or off, shouldn’t make a difference.  There is a preference to not duplicate citations even if they are duplicated in your library, when one of each are used – so they are resolved in the bibliography.  I am not exactly sure how you “used endnote wrong”?

If you do sort that list in the document group, how many duplicates are you talking about?  Once you know which ones they are, you can look at the bibliography generated, by searching for a phrase in the title or the author and see if it is there once or twice and duplicated.

you can also reformat the thesis using a different - style, author (Year) for example, and it will alpha sort the bibliography and you can scan it for duplicates.  – fix them if they are duplicate, and then update with your numbered output style again.

On the desktop version at least, you can select the  “Endnote X7 Edit & Manage Citations” option from the ribbon (see image attached) and the resulting dialog will list a “count” for each citation.  You can sort on the author/citation column (or any of the columns)  so you could see if there are duplicates listed or if a citation has 2 or more matches (which would suggest they have been “combined” and not have unique numbers.  see attached. 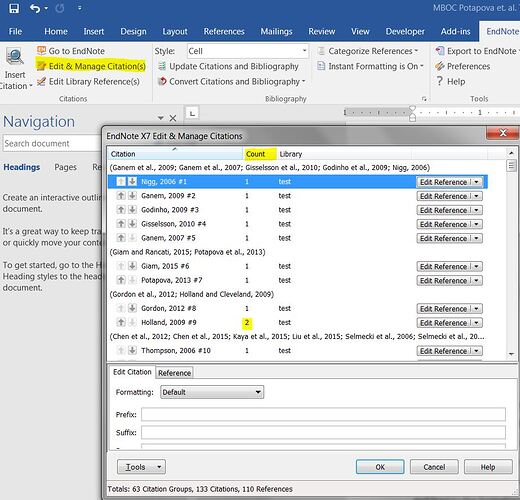