I’m  writing on behalf of a library user who is having rather dire problems with EndNote.

More specifically, he has a Word document with approximately 190 references. At some point, though, it seems that some of the references got corrupted. He had decided to switch from the generic “numbered” style to APA, but when he did so in Word, he noticed that many of the references no longer appear in the reference list.

Strangely, though, the numbered references are still connected to EndNote. When I display the embedded field codes in Word, the corrupted citations have the coding { ADDIN EN.CITE {ADDIN EN.CITE.DATA}}. However, they do not have the actual information about the references (i.e., title, author, year) that appears in the coding of the normal references.

I have looked at these FAQs Endnote and Endnote, but it seems that these steps don’t get around the problem of needing to reinsert the corrupted references.

The researcher doesn’t think that the references were inserted from separate libraries, although he has transferred the library between computers using a usb key.

Naturally, this is very urgent, as his dissertation is due on Friday. I have contacted EndNote tech support to see if they have a solution. I would also greatly appreciate it if anyone else can help determine if there is a way to restore his references. In the meantime, he is going to start on the labourious task of identifying the references that correspond to the corrupted citations so that he can re-insert them.

Thanks in advance for any suggestions! 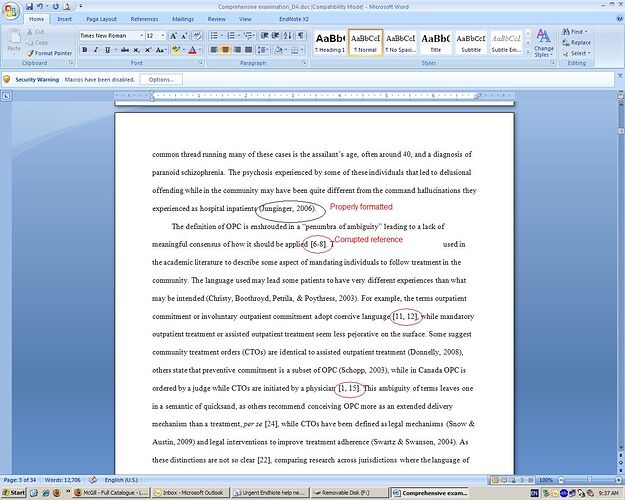 I’m battling the same problem.  One day everything worked great, the next no Word Document seems to display citations correctly.  Did an automatically-downloaded update cause this?

This setting is a universal setting for Word, so making this change should fix any documents that are currently displaying the field codes.

I have no idea how or why Field Codes was checked.  Gremlins.

I wish the problem was only that field codes were displayed, but no, sadly, the problem is that some of the citations seems to be corrupt. Part of my determination of this was to purposefully SHOW the field codes and compare the correct citations with the problematic ones. Thanks anyway though.

Just received a message from EndNote tech support saying that there was nothing to be done; the citations are lost.

I still don’t know what exactly happened in the document to cause nearly half of the citations to be truncated or corrupted, but I guess it’s just another warning to not trust EndNote–always keep multiple backups!

Just FYI, I think it’s the same  question of this one:

I have almost the same problem using reference manager. It happened after I gave my document to my supervisor who then tracked changes. Some references are fine, but most are corrupted with no actual information, in the field code. Did you even find any solution to this? Or how to prevent it happening again??

We were unable to find a solution to the problem originally posted.

If you are sharing a document with someone not familar with or using your bibliography software, then it is best to share it in the “unformatted” state, which I assume you can do with Ref Man, as you can with Endnote.  The amount of information buried in those field codes is prodigious.

mjm THANKYOU THANKYOU. My thesis is due in 10 days and I opened my docs this morning to see that EndNote in-texts were all corrupted. Gremlins is right. This “show field codes” unchecking fixed it

Updated note to users: This also works in word for windows 10 (Office 365).

Thank you for addressing word issues.

Hi everybody, I wish you all a Merry Christmass and happy New Year,

In the same context,  in-text citations, I am encountering the problem of changing from Chicago 16 to APA as per the journal requirements. But I am not able to get my references as in-text between brackets format (e.g., Chomsky, 1988).

References are still shown in numbers in the text linked to footnotes, as an example:

Please contact Technical Support directly for assistance with this issue.