Customized citation style does not work / Word 2007 Freezes and more

I have couple of suggestion to share with on EndNote X5

Firstly, most irritating thing is that sometimes when I accidentally delete a reference, Word 2007 freezes, whereas EndNote X5.0.1 states to switch to Word. I does not work, unfortunately because Word does not response. It happened so many times that I can clearly say it is bug. It has to be handle somehow.

Secondly, I’ve reported bug which has not been fixed in this patch. In default form of any style, this time I have used APA 6th style, brackets are added around citations by default and in the Default form. In second form–Author (Year), brackets are around Year only. When I remove brackets in style definition in Default form field, such that citation is not enclosed within brackets, the second form is displayed incomplete

Thirdly, Would it be possible in future to control whether bibliography is to be included or not? Sometimes when I work on chapters in separate documents I don’t want bibliography to be there until in the final version.

In redponse to your third request,

I was sure you could  turn off the bibliography in the output style with a click on a box, but I can’t for the life of me find it in EndnoteX5.0.1. Does anyone remember where this option is (was?) located?  Maybe it got removed when section options became available?

In any case, I seem to remember it  would necessitate changing the style and saving it to a new name and applying the revised output style to the manuscript in question (not just in the Endnote program)  – the workaround is to delete all the templates from the bibliography and save as new style and do the same.

Thirdly, Would it be possible in future to control whether bibliography is to be included or not? Sometimes when I work on chapters in separate documents I don’t want bibliography to be there until in the final version.

You simply need to use the “Sections” option in the Output Style Editor in EndNote to modify the Output Style to support multiple bibliographies in a single MS Word document. I believe we call this “Sections” as that is actually what Word calls things like “Chapters.” EndNote respects the “section breaks” to insert multiple bibliographies [or not] in longer Word documents.

A screen shot is attached. 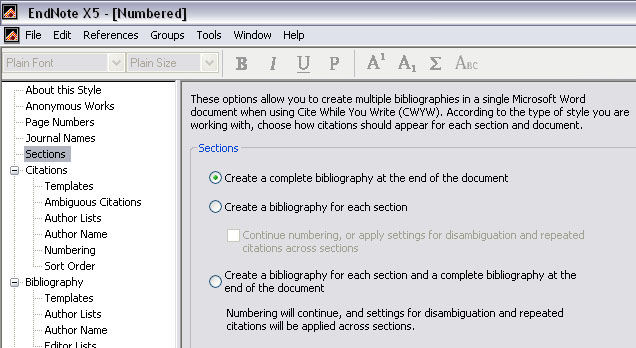