I have my settings to forward me a message everytime someone posts.  Thus I am able to quickly respond to users.  For the last few months, I am seeing multiple emails for the same posts, and sometimes they result in multiple posts in the forum, and sometimes several of them are deleted (by the system or by the user, I don’t know) and duplicates disappear or the second (sometimes third) link doesn’t work.

Lately I see posts, I can’t reply to.  They aren’t listed in the forum list at all, and sometimes they appear after a few days, and can then reply.  They are usually new users, so I wonder if they are flagged for moderation for some reason, but – then tons of messages - particularly in the Community Forum clearly spam, are not removed or appear without this moderating step (and they usually get deleted if in the Endnote subforums).

An example of this later post  - which I can’t reply to and if I try to message the user, says they don’t have PM activated is here?

http://community.thomsonreuters.com/t5/EndNote-How-To/bibliography-untidy/m-p/133274#M24532   Just in case it disappears or becomes “replyable”, I attach an image of the link below.  The user has visited the forum since posting (but I was unable to PM the user either) and probably wonders where their post is?

Anyone else seeing these symptoms?

Luckily, forum posts go directly to a folder (as I have set an Outlook rule to do so) so I don’t get all these duplicates in my phone or inbox directly, but it is still frustrating. 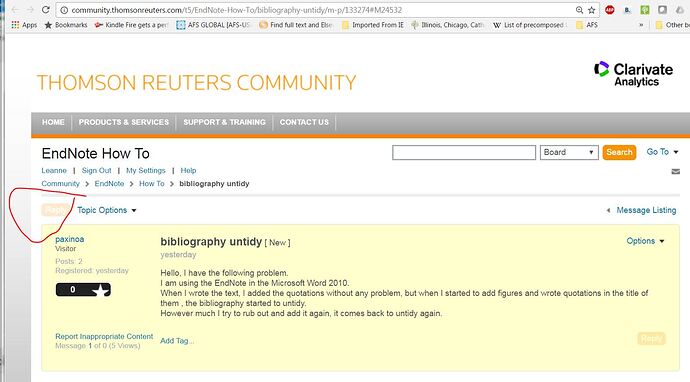 I am still getting many duplicates in my email and some are readily apparent in the forum themselves.  – No one else?