Here are some of the highlights from the new EndNote version X5 for Windows. A screen shot is also attached.

View and Annotate PDF files within EndNote -A new PDF viewer joins the “Quick Edit” tab in EndNote X5, enabling users to review an attached PDF and edit a record in one place. The PDF viewer makes it easy to navigate between multiple attachments as well as annotate the file with highlights and comments. Users can search the entire PDF including comments and use many familiar options common to PDF viewing.

Find Reference Updates -Existing references can now be updated easily with a new option that lets EndNote search online for more complete reference detail. When a match is found, EndNote highlights the differences in a side-by-side comparison of the new and existing reference. Users can decide whether to update the empty fields only, replace all the fields, or copy-and-paste specific information.

New Conditional Formatting Support - use new conditional formatting in journal styles that substitutes data for empty fields automatically. While any field can be updated, the new feature saves time for existing references that now require article identifiers such as PMCID and NIHMSID numbers for grant submissions. 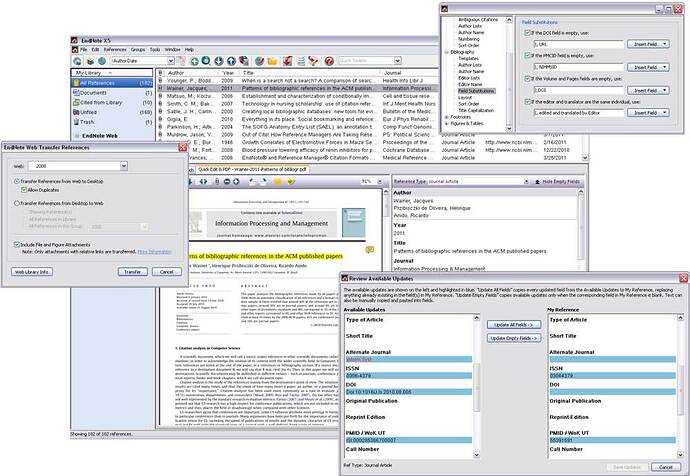 Thank you for the post. I like the new feature of opening and highlighting the PDF file directly in Endnote. This makes me wondering why not to be also able to open a word file directly in Endnote? If we were able to open a word file in endnote, as a tab just near the PDF file, this will save a lot of time for writing articles! I am also wondering why Endnote doesn’t import PDF files directly, and automatically when it is available, for example from the open journal websites? When I search for an article in NCBI for example or other databases, and if the pdf file is available (for ex. in open access journals), I would like that endnote proposes me to download the pdf at the same time as the reference!

PS: The sticky note in the pdf file is not movable. I think it is better if we are able to move it her or there in the text.

I would very much like to know what changes and/or improvements have been made as a result of the many suggestions and reports of problems posted on this forum with regard to navigation and editing. What, besides handling of PDF documents (should this be useful to a given user), is a serious enticement to upgrade because it fixes problems that have angered users for months and slowed down their work? What problems have been fixed? I am sure that users would so much appreciate going through a detailed list of such modification.

By way of conclusion, I can only urge Thomson Reuters to revise its video of new features as soon as possible to eliminate all those silly animation effects, especially the spinning ellipse in the opening and closing segments, which is likely to make a very bad impression on visitors. EndNote users are clearly not the audience for such animation effects that may appeal to teenagers but not to academics, who surely account for a very significant proportion of the software’s users. There is no need to take the software “for a spin” in such a realistic way, as the narrator says near the end… It is generally agreed among Web designers that animations can become very tiring and should be used very sparingly (if at all).

So yeah,  I downloaded X5 and upgraded earlier this week.  No problems with the install, though I didn’t know it was about to re-index my PDF files.  Long story short: No problems upgrading.

So I’m pretty jazzed about the new PDF capability that was touted, but was pretty dissappointed in what was offered.  C’mon, folks… a static note box?  Sorry, but that’s a pretty lame implementation of an annotating tool.  You’d think it’d be linked or copied to the Research Notes field.

+1 on the comment about the tabs…seems like there’s still quite a bit of screen real estate that could’ve been used.

Why stop at PDFs?  Why not html and doc(x) files, too?  (Or OO equivalent)

Sorry, but I can’t say it was worth the hundred buck for the upgrade at this point.

I’d love it if there was a button on the toolbar to attach a file so we didn’t have to go through the menus to do this.  It’d save 3-4 clicks for the operation.

An Attach File icon on the toolbar seems like a reasonable enough request. In the meantime to save clicking, you could try the keyboard short cut - Ctrl+Alt+A - to get to the File Attachment dialog more quickly - or try dragging and dropping files from the computer desktop on to an EndNote record.

I agree with this contributor. Additionally, regarding the animation, I question if it is 508 compliant.

An Attach File icon on the toolbar seems like a reasonable enough request. In the meantime to save clicking, you could try the keyboard short cut - Ctrl+Alt+A - to get to the File Attachment dialog more quickly - or try dragging and dropping files from the computer desktop on to an EndNote record.

Hah, I’d completely forgotten about that keyboard shortcut.  Thanks!

I have recently purchaes Endnote X5 and I have run into a problem in installing a copy on my desktop. Instead of the little paperclip icon on the pane, there is there is fig+ and the pdf attachments that were visible next to references in X3 have disappeared. When I go into the reference, they are still there. Any thoughts about how to solve this problem?

What version did you upgrade from?  The field you are seeing is the “figure attachment” field.  It holds one file and many of us used that as a convenient place to save a PDF before they added the File attachment field (circa EndnoteX?) which can hold multiple files.  If all you ever used the fig attachment for was PDFs and never to hold Figures to use the relatively useless insert fig option, there is a convenient transfer you just need to use once.  Under References>figure, there is a conversion utility. Open your library, select all and perform the function conversion. Then change your display (from Preferences)  to show the file attachments rather than figure field in the first column, and it will look just like it used to, but with the ability to attach multiple files (say the PDF and the supplemental files).

Hi - I just installed endnote x5, and was looking forward to the new pdf functionality.  It is very nice to be able to search for full text online, but I’ve found that some of my references do not have the appropriate web address, and therefore pdf searches do not find the pdf.  At least in one case out of just a few I’ve tried, upon updating the reference, the pdf was found.  Many of my references are old (I’ve been using endnote since 1997), and I would like to update all of my references with the most current information.   Is there any way to batch update the references.  Going through one at a time will take far too long.  I feel like this must have been an option in previous versions, as many of my references have the same last updated date.

Has anyone found that some of their bibliographic data has been deleted when they upgraded from x to x5? Some of the data that I had entered for my manuscripts and early printed books has been erased–in particular all publication info that I had entered. Is there a way to retrieve this? Is there also a way to transfer the various edits I had previously done to my output style? I had made one specifically tailored to my needs, and now it’s gone as well.

I don’t really think you should have lost any data from your existing records.

As to styles, did you overwrite the endnote program folder (I always install into an EndnoteXwhatever specific folder).  If you stuck with "endnote: then the styles are likely to have been overwritten if you kept the same filename. Have you tried searching for the style to see if it lives elsewhere and you can move it to the My Documents/endnote/styles/ folder?

Do the updates to EndNote Web which are installed with EndNote X5 include Lion compatibility?

I’ve searched the knowledgebase and can’t find any information on this one way or the other, although the compatibility chart for EndNote web implies that the standard version isn’t compatible with Lion (or perhaps has not been tested).

I have a user with EndNote Web 3.1 with access via our Web of Science subscription and she is having difficulty using CWYW - the toolbar installs but gives an error if she tries to cite anything.

EndNote and EndNote Web are on slightly different development tracks, and the system requirements for either one are going to be different from time to time. There will be a future release of EndNote Web that will have been designed and tested from day 1 to work with Lion, and that version will have the OS listed on the system requirements page. We have not had reports of Lion specific issues with the current release of EndNote Web - If anyone is encountering issues, please contact our tech support team directly.

It sounds like the issue above may just be with CWYW, which may be a seperate issue that is not OS specfic.

thank you for your help

Before I buy Endnote X5, I would like to know more about EndNote Web.  Particularly, I’m interested in the feature that allows you to upload your pdfs to EndNote Web.  However, my current library has nearly 3GB of pdfs, so will there be a way to expand the amount of storage you have access to in the web feature?

“View and Annotate PDF files within EndNote -A new PDF viewer joins the “Quick Edit” tab in EndNote X5, enabling users to review an attached PDF and edit a record in one place. The PDF viewer makes it easy to navigate between multiple attachments as well as annotate the file with highlights and comments. Users can search the entire PDF including comments and use many familiar options common to PDF viewing.”

Not really a ‘highlight’ as they don’t work cross platfrom -  notes made on a mac library won’t show if you view PDF in Endnote on a PC (but will if you view in PDF viewer, i.e. the endnote PDF viewer is inconsistent and incomaptible, sigh).

Oh - and while they are ‘searchable’ the results list gives no context - the notes aren’t integrated and searching references is just that: find a reference rather than find text or note content nor highlight or show text in PDFs or where a note is. X5 seems to be the cutting edge of 2002 technology. Still no cloud support either and recommended not to use cloud services for a library and instead the truly awful endnote web (no sync but ‘upload and download’ no integration of collections etc. etc.) overall  a really really poor implementation compared to Mendeley’s excellent annotation system. Come on Endnote - you’re getting further and further behind the game now and aren’t innovating but doing a bad job of chasing.