When I insert a citation with 5 authors, it displays all 5 authors instead of the first author and then et al. I’ve changed the APA style for first and consectutive appearances to show et al if more than 3 authors but it still doesn’t show? 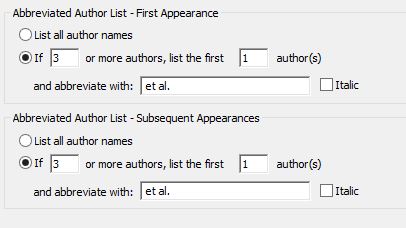 After saving your edited  style (to a new name, as otherwise there will be two files in two locations with the same name and there is no way for you to tell endnote which one you want to use) you need to go into the manuscript and change the output style to the newly edited one.  Changing it in the endnote program has NO EFFECT on the existing manuscript.

I’e saved it as a new name and changed the settings in that new one but I don’t know what you mean by changing it in the manuscript?

In word - on the endnote ribbon, there is a Style: box and you need to set it there to the new output style name.  – you may have to first view all styles to see the new style as it won’t yet appear in the dropdown.