Getting the _____ for subsequent works

I wonder if someone could help me with this problem.

If anybody knows what the problem might be, I’d be very grateful to hear from you.

As far as I can tell, this only works if all the authors are exactly the same.  If that is the case, make sure that the author is EXACTLY the same by copying and replacing the author inform from one record to the other.

This is a mystery.

The author names are identical but they just keep appearing as full names rather than ______.

I changed the output style twice to see if that would help but still got the same unhelpful result. I’m going to be in trouble!

Leanne, if you have any other ideas please do let me know.

If anyone else has a suggestion I’m willing to try it.

Did you follow my suggestion to copy the complete author list from one record to the other record?

Thanks for taking the time to have a look and testing it.

It is really frustrating because it looks like it should be so easy but I can’t sort it out. I have attached some screen shots to this post just in case it gives any hints as to what i might be doing wrong. I’ve tried all the styles that are in the drop down box including all the Chicago’s and none of them will show the ‘____’ so there must be a general problem somewhere. To make sure it wasn’t a typo problem, within Endnote I copied the first ref (Akerlof) in the biblio and just changed the title to ‘X Test’ so the name is surely exactly the same in both refs. If you would take a look I would be very grateful. 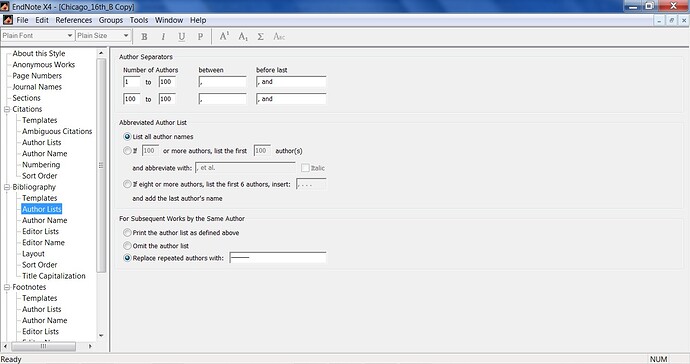 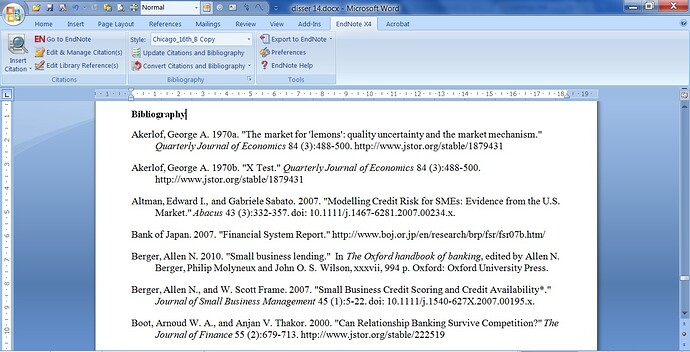 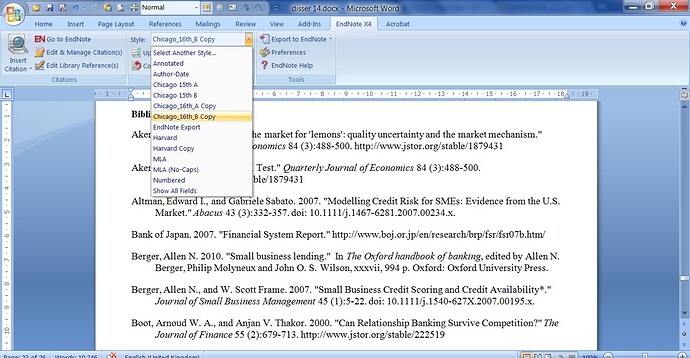 Yes, I did do the copy and paste several times with several different refs but got the same problem result.

On a lark, try this one - that worked for me?  --ADDED IN EDIT – What version of  Endnote are you using?

I downloaded the file you sent and saved it as an output then selecteed it in Endnote and also in word but it didn’t work. I’m going to try it again later when I get back and have more time. I’m using Endnote X4 (Bld 4845).﻿  It’s a real mystery so I’m determined to work it out. Also I have to because the prof has told me to use ____!

You need to update your Endnote build.  This bug was in the original Endnote X4 but was fixed in X4.0.1 and you should be on X4.0.2 now.  You update from the help menu dropdown!

Thank you for pointing that out. Now it is working!

The fact that you kindly give your time and effort to those of us who are learning how to use Endnote is truly appreciated.