How to know to which group(s) belong a reference

Some references belong to several groups

When the “All references” is open, it would be helpful to know to which group(s) belong the references (for example in reference details…) (to check if the reference is listed in all the group that it could belong to)

In the upcoming version of EndNote - X2 - available for Windows later this month - we have added the ability to see which “Custom Groups” a record is in.

Great ! I am looking forward to sseing that in action !

Do you mean through the ‘Group summary’?

Is there other way to see it? Like to show the custome group name in the tap pane, or in the preview box?

I have now updated to version X2. I am however not able to see to which group a reference belong. Could you please advise me on how it will work. 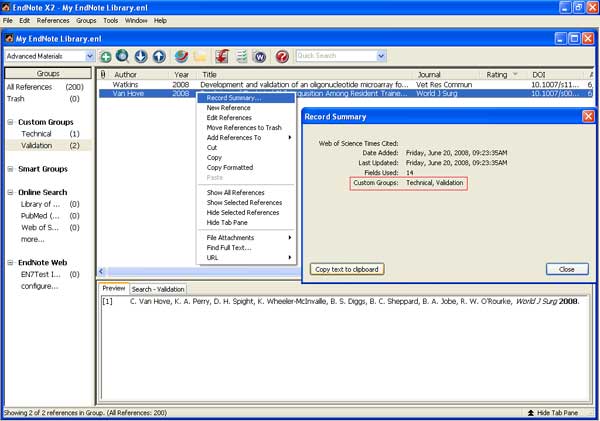 It would be nice to have a “Search” feature to find references that belong to custom groups, using AND/OR/NOT algorythm.

My master library has grown to >6000 records, and I really like Custom Group feature. But, with more than 300 custom groups, it is getting harder to find what I am looking for.

For the next version of EndNote, we are hoping to implement the following:

Please make sure that you can do a subject biblio based on custom groups also!

mdb777 that is a great suggestion. To generate a subject bibliography based on custom groups seems to me a great feature!

I would suggest that what we really need is the idea that Custom Groups (not Smart Groups, which are functionally very different) should be treated as a many-to-many index in the relational database.  If we do this, we have inherently a function to highlight the belong-to groups whenever a reference is selected-highlighted in the main pane (including when only a group is being shown, we should be able to see what other groups the references in the selected group belong to) and we have an inherent concept of “belongs to no group”.  I do not think we need to adopt tree-form indexing of groups within groups.