How to remove hyperlinks on in-text citations to reference list?

with Endnote 4 suddenly all my in-text citations are formatted as hyperlinks when creating a reference list at the end of the manuscript. This is very handy but I don’t know how to deactivate this function?!

Further, if it is hyperlinked to the reference list, it would be nice to have a ‘back’ button that sent me back to the in-text citation clicked (especially when not intended).

Funny, but this problem seems to be the same in Reference Manager and I have copied the list entry from there as it in other words describes the (same?) problem.

"I’ ve the problem that whenever I create a bibliography (my reference list) in word, hyperlinks of the electronic citations are activated.

I know that I can deactivate them manually by clicking on “delete hyperlink” but if I create a new bibliography they are activated once again.

Do you have a tipp to avoid this and to deactivate them definitely?"

In the format bibliography dialog, there is a optional tick box that will deactivate the hyperlinking feature for that document.  I know of no global settings however, that will inactivate the feature on any future or existing document.  Good preference to ask them  for in the suggestions forum where others might “kudo” it.

Attached is a screen shot showing what Leanne mentions. We originally wanted to include some type of “back” functionality but were not able to figure out a way to do this. Word does not offer us any specific hooks for this and in general hyperlinks do not support this. 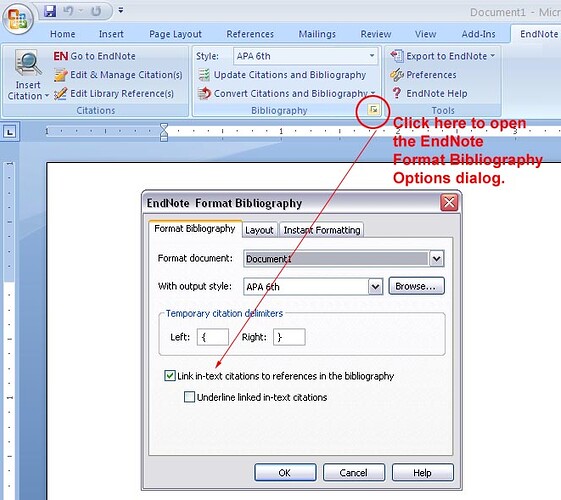 Just to add that besides “turning-off” a bibliography’s hyperlinks in EndNote as an alternative you could also modify MS Word’s style to change the font color and remove the underlining in hyperlinks. Since the MS Word style may be modified for current as well as future documents, once set you won’t have to reset  (which you would need to do in EndNote.

But that doesn’t make it “unlinked”.  just invisibly linked.

True - it’s a cosmetic camouflage which masks the hyperlinking but may suffice depending upon the circumstance.

Thanks Leanne, I just didn’t find/realise that option in the dialog.

BTW, it seems that MS word 2008/11 has also taken taken the icons off in their options that allowed you to click on a ‘back button’. I used it (‘customize toolbars and menus’) in earlier versions and found it to be very handy…

You can also select all text (control + A), then do Ctrl + Shift + F9. That will unlink all references from their citations.