There is a tricky reference list for TV series episode or webisode in APA 7th.

It requires to list contributor’s name followed by contributor roles in parentheses. Please see the attachment with an underline. It is quite hard for multiple contributors.

I don’t know how to do that via Endnote software.

Is this what you are trying to get (as a new member of the forum, you probably weren’t able to attach a file yet).

Are you trying to use Film and Broadcast as the ref type?

for that ref type, I see fields named (see attached)

If you don’t performer for other records of this ref type, you could repurpose one as the Writer (perhaps the subsidiary author/performers) then Director stays Director, then producer stays producer.

In APA 7th “Film and Broadcast” template is currently

In addition to the pipe symbols, you will probably want to insert some “link adjacents” between field names and words instead of spaces.  It might take a bit of tweaking (which I can help with, if this makes sense).

If you need film and broadcast for another purpose, you may need to creat a new reference type and template to accomodate tv episodes following the same strategy copying and perhaps repurposing each author type. 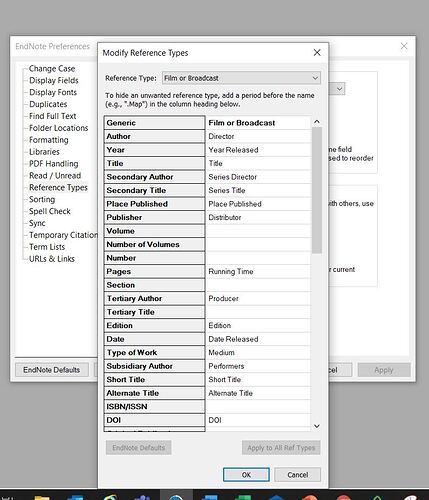