No Edit Citation option in Context Menu in EndNote X6

I hope someone can help me.

I installed EndNoteX6today but I don’t have an Edit Citation option in Context Menu in Word 2007. I tried uninstalling and reinstalling several ties, but nothing seems to work. I attach a screen shot of the issue. Thanks inadvance and I appreciate your help. 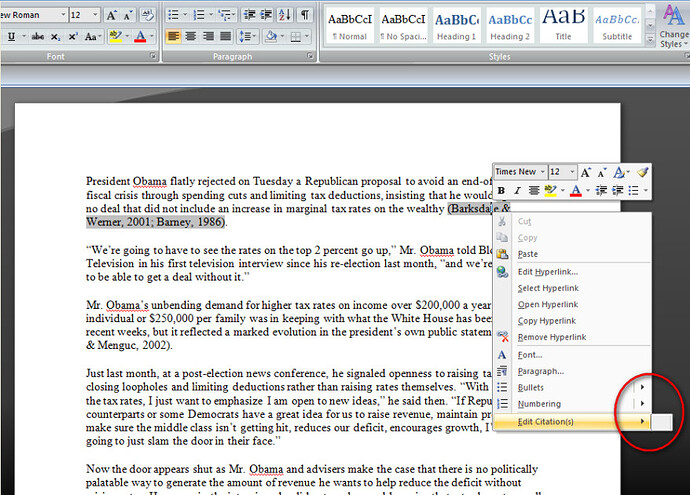 Did you try the option mentioned by JasonR  in this thread(albeit for an earlier version of  EndNote and MS Word 2007)?

Thanks for your reply. Tried doing as is suggested in the post you directed me to. Still no luck! Is there anything else I can do? Thanks.

Did you check that the EndNote add-in files are activated in MS Word?  Did you upgrade to X6 from an earlier version of EndNote (if so, what version)?  When you installed X6 was the MS Word application closed or open?

All the EndNote add in file are activated in Word. I had verion X5 installed before, I uninstalled that usung Revo Uninstaller and then reinstalled X6. The Word application was closed during the process. Thanks.

What version of Windows are you running?

Unless there’s something regarding “Ultimate” + EndNote 6 + Word 2007  it seems the edit citations menu should be working. Suggest contacting tech support:  http://endnote.com/support/contact-support 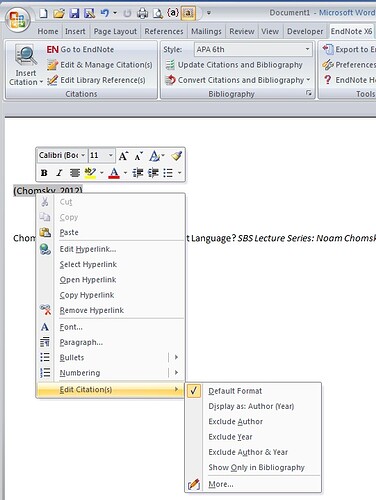 Yes, it seems to be a strange error. I uninstalled both MS Office and EndNote and then reinstalled them, still the issue persists. Thanks for your time.

Thanks Jason. Leme do it then and report back.

Your advice worked. I updated MS Office and have the context menu now. Thank!