Problem with importing Tertiary Title when used in newspaper articles

The files is imported correctly but there is an exception: %S is missing. What’s wrong? Please find this file attached (you need to change the file extension from txt to enw).

It appears that the Endnote Import.enf file is the filter used by default when you import an .enw file, but I see that the %S field is set to {IGNORE} in it, in the Newspaper Article Reference type.  Also, my Newspaper article ref type doesn’t have a tertiary title field, out of the box.

So I first inserted a Tertiary Title in the preferences ref type for newspaper article, and then edited the the Endnote Import filter to use that field from the dropdown list in the Newspaper article template.  See if that  works for you (save the attached enf file), or you could try importing this as a “txt” file and assigning the Endnote Import filter

Then I found it necessary to remove the old Endnote Import .enf file and replace it with the new one (renaming  it “endnote import.enf” so endnote uses the newly edited one.  Otherwise I don’t know how endnote chooses the appropriate filter file, since it is sort of automatic with an enw file. and “Save as” to the same name means there are two of them on the computer (at least on a windows machine) one in the protected program/endnote/filters folder and one on the users documents/endnote/filters folder.  you want unique named files  – I may be making it more complicated than it is,

You could rename your files .txt files and manually import them with the edited and slightly renamed endnote import.enf?

to test this, I also assigned the field in Endnote - to be Tertiary Title and used the insert field drop down to insert that.  Before doing that, simply typing the words “Tertiary Title” didn’t seem to be recognized and it was still imported as a blank.  Anyway, here is the Import folder I THINK I used.  you can try opening it and saving it to see if it works without all the mucking around, but I think it will need to be in your program filter folders. 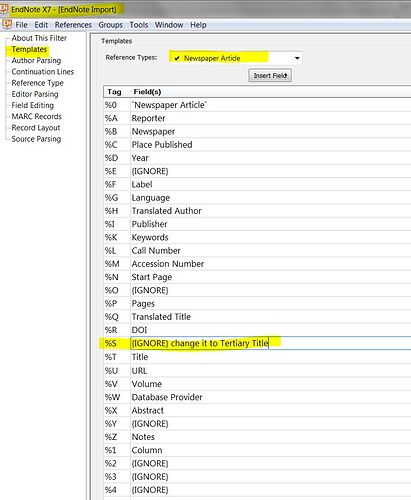 Perfect, as always. Much appreciated!