I need to divide my bibliography into two groups: Primary Literature and Secondary Literature. It should be an even division - nothing should appear in both lists. It would like this:

I have *no idea* how to do it. Can anyone help?

We have added an automated feature “Category Bibliography” to Cite While You Write in EndNote version X7 - screen shot attached - this feature is not included in older versions of EndNote. 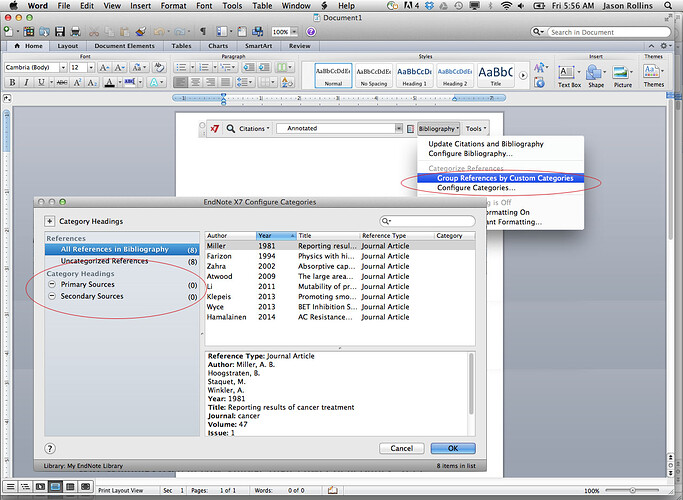 (added in edit - or you could use the new feature that Jason just posted!  - but I see you have X6, so the below would still work)

The easiest way to do this, is to first create a custom field (edit preferences, ref types, modify those ref types you use in your writing) then in the records, assign that field to contain with the words “primary” or “secondary” (or any word or number to sort them correctly).

Then you will need to edit the output style you use to adjust the sort in the bibliography section to include that field as the first criterion. You do not include the field itself in the templates.

This will order them correctly in your bibliography, but without any headings separating the two groups.   First the “primary” references, then the “secondary” references.

Manually you will need to introduce (after turning CWYW off) the headings to separate the two groups, before submitting.

Or, on a copy, you could first remove the endnote fields (tool bar option) or convert to plain text, before adding the headers into the bibliography.  Just make sure that when doing revisions, you go back to the endnote field containing copy.

Thanks Leanne. Hopefully this is helpful for some but I think it also highlights why we took the time to add a more automated solution into version X7.

These are both really helpful responses. I see that my university has endnote X7 for mac available now to download.

I’m pretty nervous about making any software changes this late in the game (dissertation submission in a few weeks). Is there something I can do to back things up *just to be safe*, so that if the transition to X7 snags at all, it doesn’t cost me too dearly?

Yes, Always should back up the endnote library and .DATA folder – I just copy the library (save as) to another place and have backups of your thesis (as always!). It can take a bit of time though, if lots of PDFs, so don’t rush it.   You can also make a compressed copy of the library – which packs up all the .DATA folder content and .enl file into an .enlx file you can later unpack in a new location.  On a PC that is in the File menu, but not sure where it is on a Mac Endnote version.

My students all just switched from X4 to X6 to X7 over the course of a few months, and had only one minor glitch with a Word 2010 thesis document, which was easily fixed (had to do with the settings for the output style application to the bibliography, but modifying the output style fixed it)  – that was on the PC.  Many of my colleagues have moved from Endnote X4 to X7 with no problems I have heard of (and believe me I would have heard, as the local Endnote guru).