Which output stylr are you using? Can you provide a screenshot or text example showing how the citations have been entered in-text and the resulting bibliography to give a better context of what you’re doing and what’s wrong?

Thanks for you help! I am still new to end note and not fully confidant with all the terminology yet. Maybe if I rephrase my question it might make things easier. I am using a modified version of the “chem comm” style where I have where I have clicked the box to use range for consecutive citations, and the box to use one number for references cited together and they are separated by ; and lower case letters preceded by ( and followed by ). (I hope that made sense). 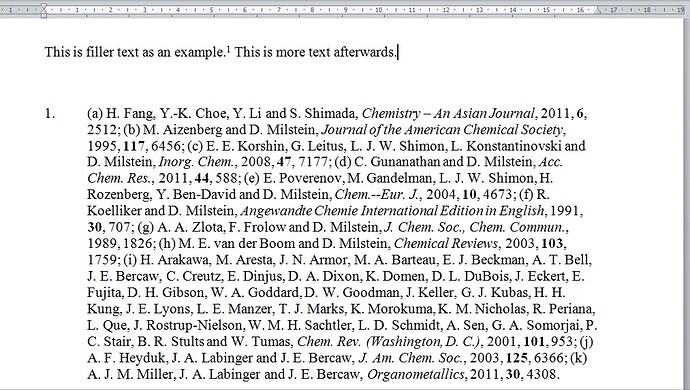 you would have to divide up the references into groups and cite them separately with words between them.  Why would you want to do that?  Mind you, if later you cite a thru c as one set later in the manuscript, on their own, it will divide them up in the original citation too.

Thanks for the screenshot and explanation. The format you’re requesting is going to be an issue as it calls for using letters within and across grouped references which, in conjunction with the redundant grouped reference (1-4), seems unusual . So you might recheck your style or publication guidelines to confirm the format is correct. At present, EndNote permits a set range of letters within each grouped reference with the range of letters starting over at the beginning for each new group.  So in your example, references (a) through (c) will be correctly listed in the reference list but references (d) through (g) will be lettered (a)…(d).

But you can achieve a fairly close result (see attached image).  Then when the paper is completed, the workaround is to manually change the range of letters (green highlight) on a text copy of the original document  (i.e., EndNote field codes removed).

So the overall process is to:

Again, thanks for the help so far. I realize my description earlier might have been confusing. Attached is a screen grab of what I would like to do. It was done manually, I would like to be able to have end note do it. Is there a way? 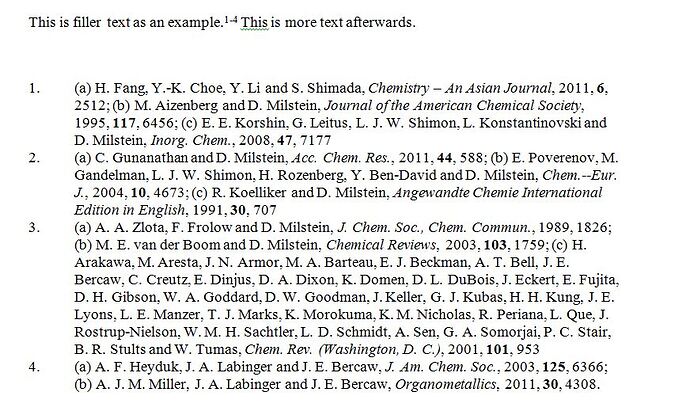 Thanks for the clarification. The format is going to require entering each group of references as an separate insert (creating the 1 to 4 superscripted numbers intext), then “hiding” each superscript number. Unfortuntely there doesn’t appear to be an edit citation feature in EndNote to hide numbered citations but in MS Word you could change the superscript font color to white then close-up any extra spacing - which “hides” the superscript while maintaining the EndNote codes to retain the biblliographic format you seek.

As CG says, that is not possible with the curent abilities of Endnote, but why do you want to break them up in that way.  If it is because you want to use them later, Endnote will automatically break them up to achieve that.

If you want to quote all of them (as 4 separate groups) (which when you write it at first will be one big group)and later talk about the first set (citing a, b and c and thus 1) then about the 2nd group (2)  citing the next few, and then third group (3) and then 4th group (4).  At the end of the day, this will result in that first set being (1-4) too.