Does anyone happen to know if Endnote works on Lion (10.7.) Has anyone used a beta install and tested functionality? I know the product is not officially supported on Lion, but wondered if anyone had any info on its compatability?

Many thanks in advance,

As you indicate, all currently supported versions of EndNote are not officially compatible but  testing versions X2-X4 to determine informal compatibility status is underway. Official compatibility will be available in EndNote X5 which releases in a few months.

We will post to the forum when this testing process is complete.

I use EndNote X4 for Mac compatible with Word 2011. Do you recommend me to upgrade my Snow Leopardo to Lion? Will EndNote keep running okay for me?

Not working for me at least… Endnote X4.0.2 opens ok, but does not open the Endnote tool box for Word2011… I would stick to Snow Leopard for now. Although you might check this web site as well: http://massbycharge.com/?p=20

Have you tried reinstalling Cite While You Write? This FAQ may help - http://www.endnote.com/support/faqs/CWYW/faq1.asp﻿.

Thanks for the tip! I installed a service pack 1 for Office 2011 and it seems that this was the problem. I removed the office and reinstalled it. Now Word2011 & EndNote X4.0.2. work OK.

I found a solution that works for me (can’t say if it’s just me though). It’s a drag, but it works for now in Lion - which at least is something. Hopefully X5 will soon be out to address this problem (or an update to X4…)

So the solution for me - for now - is to remove or add the “EndNote CWYW Word 2011.bundle﻿” file from the Word startup folder before opening a document. Tedious, but at least I can keep working on my papers until there is a permanent fix…

Hope this helps someone out there

After having installed Lion: when saving and closing Word 2008 with EN4, Word crashes. The data is saved, but the program leaves me with an error message. I’m pretty sure this is about Lion–I’ve installed Lion on a second MacBook, where I do not use Endnote–and in that enviroment Word behaves normally. 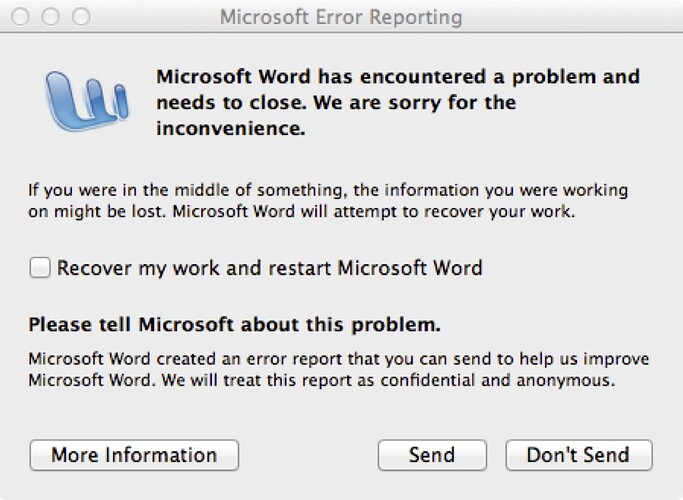