I work on a university campus that is currently using EndNote X4. We’ve noticed that we are unable to save the script setting in the preferences for display font. (see attached screenshot) Even if I select a script other than “western” and click Ok, then Ok or Apply, the script option reverts to western every time.

For example, to display Arabic characters and diacritics, I want to the font to be @MS Arial and the script to be Arabic. But I am unable to get the script to remain on this option; it always reverts to western under the four tabs in the display font preferences.

However! I am able to save the option on a computer running X5.

Is this a known bug in X4? Other advice? 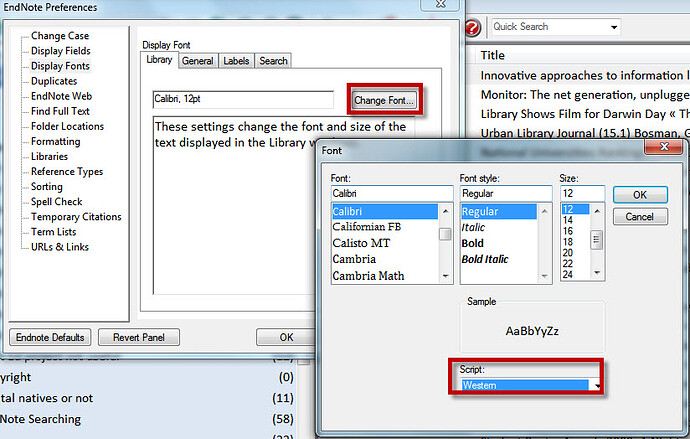 I’m now having the same problem on another computer with X5 (Windows 7). Is anyone else having this problem???

Just checking in again…is anyone else unable to have the script preference setting retained?

Four weeks is a long time to wait for an answer to your query but you may not be getting any response as the problem you’ve described may not be an issue for others.  Suggest you contact tech support for assistance: http://www.endnote.com/support/entechform.asp

This is based on what scripts are actually installed on your system. You will likely see the same issue if you go into the Internet Options Control Panel and select Fonts. While you can change the Language Script, it will likely revert when you re-open the Fonts display. The same goes for the Font displays for other programs, like Microsoft Outlook. This is all based on what Font Scripts are actually installed through the Regional and Language Control Panel. See the following Microsoft article for details:

I did write to tech support weeks ago, and I just got a reply saying that this was a “known issue”–with no further advice nor an indication of how many other users might be experiencing this problem.

Jason, I will check the various computers on which I’ve noticed this issue, but I’m pretty certain that the appropriate languages are installed…

fitz_m, be sure to check other applications on those computers as well to see if you can set and retain another “Script” setting. A good one to check would be Internet Explorer through the application or the Internet Options Control Panel, as mentioned previously.